Sardar Ka Grandson Review: Neena Gupta is saddled with a single-note role and awful prosthetics. Arjun Kapoor, left with the onerous job of carrying the film on his shoulders, flounders. 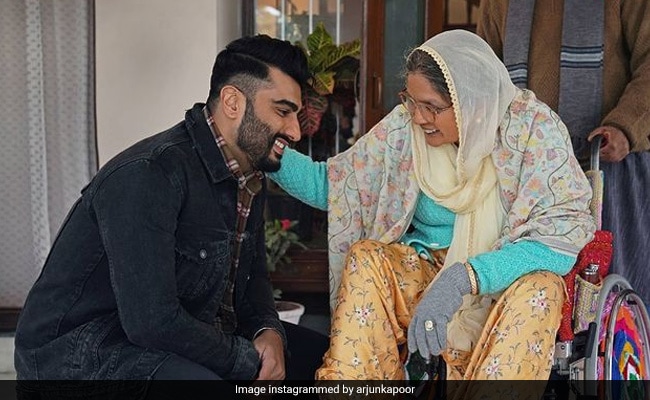 The male protagonist of Sardar Ka Grandson, a family drama that expends all its energies on pointless prattle predicated on a yawn-inducing yarn, is an Amritsar lad who owns a company in Los Angeles. The firm is called Gently Gently, Packers & Movers. Gentle, however, doesn't come easy to the guy. He is as clumsy as a bear. He loses a client's dog, breaks a cinerary urn and wrecks a prized music box all in a day's work. "You only know how to break things... You just never fix them," his angry girlfriend and business partner yells at him.

Later on in the film, the mishap-prone man has to prevent a wrecking ball from reducing a pre-Partition Lahore building to rubble. It's a tall order. The outcome of his efforts and the fate of the structure - the two are obviously interlinked - form the crux of the second half of Sardar Ka Grandson.

The foundation that Sardar Ka Grandson, directed and co-written by Kaashvie Nair and streaming on Netflix, rests on is feeble. The Partition is referenced, a man's relationship with his grandmother is explored, and a family tussle over inheriting a profitable bicycle manufacturing business constitutes a key part of the plot. The binding of the various elements - India-Pakistan relations are also thrown into the mix for good measure but without, mercifully, resorting to corny, jingoistic claptrap - is at best perfunctory.

Sardar Ka Grandson Review: Neena Giupta in a still from the movie

Slipshod writing, an infantile (if novel) central concept and uninspired performances add up to a slumberous, wearisome concoction that never hits the intended level of wackiness. More wayward than wild, Sardar Ka Grandson, despite a proven screen performer like Neena Gupta playing one of the two principal roles, does not produce a single character or situation that could be deemed relatable. It strives to be funny. It fails. It tries to pull at the heartstrings. It comes a cropper here too.

"Khana bina achaar ke aur life bina pyaar ke" are worthless, says Amreek Singh (Arjun Kapoor), the grandson, quoting his cantankerous daadi, Rupinder Kaur (Neena Gupta), the Sardar of the title, in the introductory voiceover. Sadly, forget the pickles that spice up Amreek's American burgers and sandwiches, this isn't even a proper, palatable meal. As for the film's pretention to life, the less said the better. It limps along listlessly.

After a messy break-up with Radha (Rakul Preet Singh), Amreek rushes to Amritsar to look up his ailing 90-year-old grandmother, the owner of a bicycle firm. The old woman is desperate to revisit the home that she (Aditya Rao Hydari plays the younger Sardar) lovingly created with her husband Gursher Singh (a cameo by John Abraham, one of the film's producers). She also misses the locally distilled liquor that she would drink as a young woman.

Sardar Ka Grandson Review: A still from the movie

Pakistan denies Sardar a visa because of an untoward incident she was once embroiled in, resulting in her being put on a no-fly list. The blundering Amreek, who has never pulled off anything without tying himself up in knots, decides to play a present-day Hanuman, drive all the way to Lahore and do all he can to reunite his grandmother with the house she so sorely misses.

The premise is as cheesy as hell. As is much else. Amreek likens the pain that his grandmother has endured for 70 years - she was forced to flee Lahore on a bicycle as the Partition riots raged, leaving everything behind - to the emptiness he feels because of his separation from his lady love. This observation is meant to be profoundly philosophical. All it does is elicit a dismissive smirk.

But why single out a stray moment as a measure of the banality on show? The film is replete with ludicrous twists - the principal one centres on the mayor of Lahore (Kumud Mishra, who has never been so comprehensively wasted in a film), without whose official permission Amreek cannot proceed with his plan.

The vindictive gentleman places one hurdle after another in Amreek's path as he goes about mobilising support in Lahore's Kabootarwali Gali (Patiala stands in for Lahore) for his ambitious "structural relocation" mission.

Sardar Ka Grandson dovetails a pacifist message into all the puerility that it unpacks in a lacklustre manner on its meandering way to a predictable climax. Not all the people that Amreek encounters in Pakistan are as obstinate and unhelpful as the Lahore mayor. The owner of the plot of land on which the house stands (Masood Akhtar), who fondly remembers his roots in Amritsar, and a tea-seller boy (Mir Mehroos) become his allies. Amreek is compelled to admit that "the people of your country are very nice".

Returning to the performances, Neena Gupta, saddled with a single-note role and awful prosthetics, struggles to shrug off the limitations of the film and make something of her sloppily written role. Arjun Kapoor is left with the onerous job of carrying the film on his shoulders. He flounders.

Rakul Preet Singh is pretty all right but she is pretty superfluous too. She has a couple of scenes early in the film before she drops out of sight. She resurfaces late in the second half just as arbitrarily as she had vanished. She is back to lend the hero a helping hand. Her presence does the film's cause no good, though.

John Abraham is hopelessly miscast as a Sardarji who must protect his pregnant wife when violence erupts in the neighbourhood following the Partition of the subcontinent. And never has Aditi Rao Hydari, who has a way of making a mark even in a film as blotchy as The Girl on the Train, been so out of her depth.

Sardar Ka Grandson Review: A still from the movie

The Sardar Ka Grandson cast includes veteran actor Kanwaljit Singh as Sardar's supportive first-born and Soni Razdan as his wife who constantly frets over whether her son, Amreek, will inherit the family business. Kanwaljit stands out amid the ruins; Razdan is buried under it.

Sardar Ka Grandson isn't as bad as Drive or Mrs. Serial Killer. But that isn't saying much. The very fact that we are even thinking of these two titles by way of comparison should be enough of a warning nudge. What should you expect from Sardar Ka Grandson? Little. It will not surprise you one bit. Could it, at a stretch, be passed off as harmless fun? Well, it is harmless all right but it isn't much fun.

Army Of The Dead Review: Parts Are Suitably Horrific But Don't Add Up To A Movie That Will Blow Your Mind