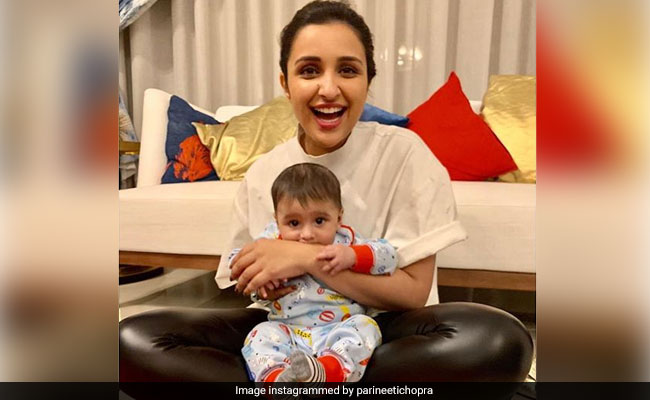 Parineeti Chopra just treated us to a delightful photo of herself and her BFF Sania Mirza's son Izhaan and all we can say is aww! In the photo, five-month-old Izhaan can be seen sitting on Parineeti's lap and happily chewing on her hand. "I'm a khaala now! Izzu is edible and I want to eat him, but for now I'm allowing him to eat my hand. Sania Mirza, can I keep this child forever?" Parineeti captioned the photo. The tennis champ was quick to respond in the comments section and had a similar reaction to ours: "Awee" she wrote along with two hearts. Sania Mirza and her husband Pakistan cricketer Shoaib Malik married on April 12, 2010 and announced the pregnancy in April 2018. They welcomed Izhaan on October 30 last year.

I'm a khaala now!!!! Izzu is edible and I want to eat him, but for now I'm allowing him to eat my hand @mirzasaniar Can I keep this child foreverrrrrr

Sania Mirza and Shoaib Malik have shared glimpses of their baby boy on their social media handles every now and then. Izhaan was very much part of Sania Mirza's 32nd birthday in November and here's what Shoaib Malik tweeted: "Celebrations! My son turns 16 days old on the same day my wife turned 16 years young, and my mother in law too. Life set hey!"

So it's been 5 days since we came into this world .. Me as a mother and my little Izhaan as my son we've even watched Baba play some cricket together since we've arrived it truly is the biggest match ,tournament achievement I've ever won or had and there is no feeling or- pic.twitter.com/KRiXVNmcox

Never thought I'd find leaving home so difficult .. After a hard day at work and away from Izhaan .. this is all I want to come back to #Allhamdulillahpic.twitter.com/skiPEhD5Hg

Meanwhile, Parineeti Chopra and Sania Mirza are bona-fide BFFs since... well these pictures are proof enough!

Not that she needs it, but I gave her my aashirwaad anyway!! Obviously with her own racquet !!! Haha what a dayyy!! @mirzasaniar @rohanshrestha

On the work front, Parineeti Chopra features in the recently released Kesari, which soared past the Rs 100 crore mark in a week. She is currently shooting for the upcoming biopic on badminton champ Saina Nehwal after Shraddha Kapoor opted out of the project. Parineeti also has films such as Sandeep Aur Pinky Faraar and Jabariya Jodi in the pipeline.