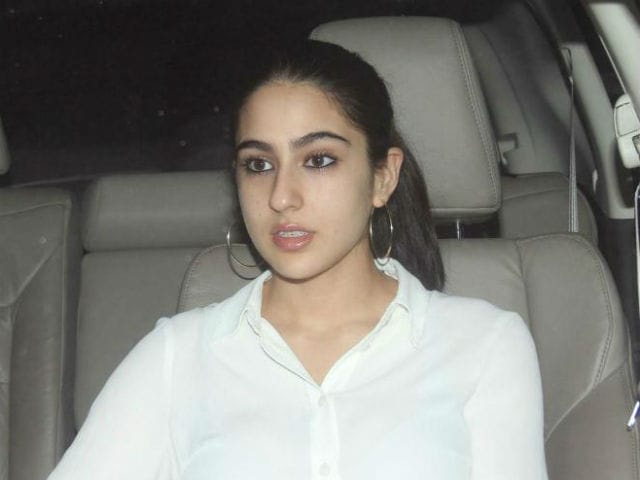 Sara Ali Khan spotted at a family get together

New Delhi: Apart from being in news for her fashion statements, Saif Ali Khan's daughter Sara Ali Khan has also been the subject of headlines for various speculations regarding her Bollywood debut. Saif has now put a stop (sort of) to all the rumours by confirming that his daughter will be making her Bollywood debut with none other than "newcomer specialist" Karan Johar. When asked about Sara's Bollywood debut in an interview for his upcoming release Rangoon, the actor told Pinkvilla that his daughter's maiden Bollywood film will be with Karan Johar. "I am very happy she is working with Karan Johar because I think he is brilliant with newcomers and he will launch her correctly. He is a very intelligent and a passionate filmmaker and he understands films. I am very pleased that she is with him," Saif told Pinkvilla in an interview.

Sara is Saif Ali Khan's daughter with former wife Amrita Singh. Saif also told Pinkvilla that he is happy for his daughter: "I am very happy to see Sara doing whatever she has her heart set on. We talk constantly and she discusses whatever she wants to and I give her my advice. But eventually it is her decision."

Promoted
Listen to the latest songs, only on JioSaavn.com
Meanwhile, sources told DNA that Disha Patani, who was confirmed to be a part of Dharma Production-produced and Punit Malhotra-directed Student Of The Year 2, has now been replaced by Sara. Disha was expected to star opposite rumoured boyfriend Tiger Shroff in Student Of The Year 2.

More details on Sara's Bollywood debut have not been made available. Earlier, reports stated that Sara could have starred in Karan Johar's remake of Marathi movie Sairat. The Hindi remake of Fault In Our Stars was also cited to be one of the probable options for Sara Ali Khan's debut.