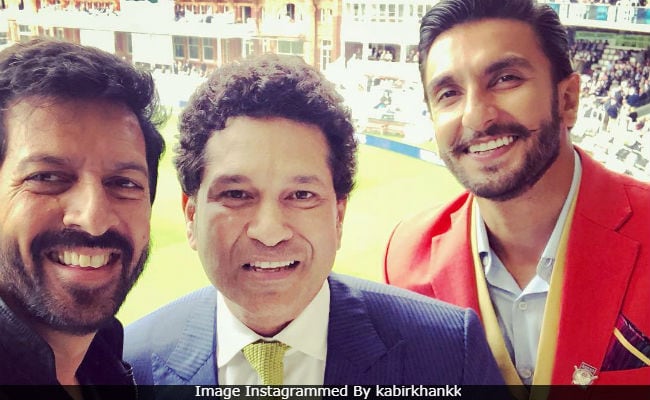 Holiday over. Party done. Ranveer Singh is back at work. He has flown to London to prep for the upcoming film '83, based on the 1983 Cricket World Cup. On Thursday, Ranveer shared a couple of updates from the Lord's Cricket Ground, where the Indian team, led by Kapil Dev, had won the Cricket World Cup against West Indies in 1983. Ranveer Instagrammed pictures with Sachin Tendulkar and '83 director Kabir Khan, who also shared the cricketer's memories of the 1983 World Cup. "Sachin was 9-years-old when he saw on television Kapil's Dev's win the World Cup in 1983 right here at this ground. That win inspired him to want to play for India. 35 years later, we kick off the prep for our film 83 at the Lord's. Can't get better than this. Can it?" wrote Kabir Khan, who has earlier made films like Ek Tha Tiger and Bajrangi Bhaijaan.

Sachin was 9 years old when he saw on television Kapil's Devils win the World Cup in 1983 right here at this ground. That win inspired him to want to play for India. 35 years later we kick off the prep for our film 83 at the Lords... Can't get better than this can it? @ranveersingh @sachintendulkar #indiaenglandseries #lords #filmprep

The upside ... I got to bump into this dynamic duo. Always a pleasure catching up with @ranveersingh and @kabirkhankk. #Lords #ENGvIND

Unfortunately, Ranveer couldn't watch India vs England second test match, as it was called off due to rain. "Rain, rain go away," he wrote.

'83 is a biopic on cricketer Kapil Dev and Ranveer plays him. During the launch of the film, Kapil Dev and several other cricketers like Mohinder Amarnath, Krishnamachari Srikkanth, Bishan Singh Bedi, Sandeep Patil, Dilip Vengsarkar were invited. Sharing a picture with them, Ranveer wrote, "I feel honoured and privileged to be part of this film."

Of the film, Kabir Khan earlier told news agency IANS, "'83 is a very special project to me. I feel it's more than a film. I will continue making films but there are some projects which come to you which are much above films and our individual career and '83 is that kind of a project."

'83 is expected to release next year in August.