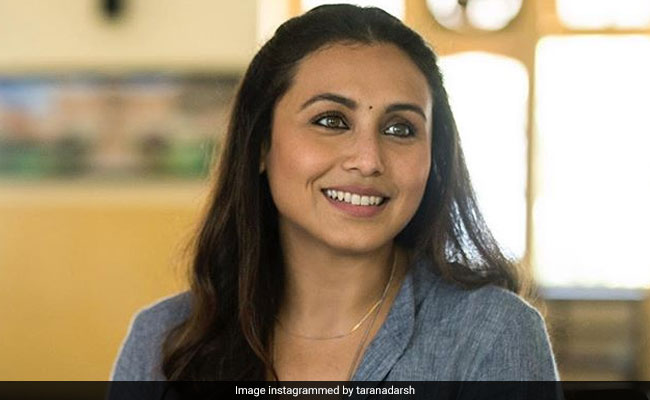 Rani Mukherjee in a still from Hichki (Courtesy taranadarsh)

Rani Mukherjee's comeback film Hichki has scored a century in the China box Office, Bollywood trade analyst Taran Adarsh tweeted. Within two weeks of its release, Rani Mukherjee's film has gone past the Rs 100 crore mark, collecting Rs 102.09 crore so far. "Hichki springs a big surprise in China. Crosses Rs 100 crore. The growth during weekends and strong trending on weekdays has helped put up a healthy total. Total till 25 October 2018: $ 13.94 million (Rs 102.09 crore). Power of good content," Taran Adarsh wrote. Speaking on the success of her film in China, Rani Mukerjee in an interview to news agency IANS said: "Good cinema has no language barriers and it connects with the hearts and minds of the audience. The success of Hichki in China proves just that."

Directed by Siddharth P Malhotra and co-produced by Yash Raj Films and Maneesh Sharma, Hichki is based on Brad Cohen's book Front Of The Class. Rani Mukerji played the role of a Tourette Syndrome-afflicted teacher, who is determined to excel at her job of teaching. The film released earlier this year in the domestic box office and collected close to Rs 50 crore.

"We knew we had made a special film but for it to get so much love and acclaim from audiences across the globe is an extremely proud and humbling moment for all of us," Rani Mukherjee said. The actress was in China recently for promoting her film, which released on October 12.

Besides China, Hichki was also released in Russia and Kazakhstan. YRF's official Instagram account had earlier shared the news that Hichki is stated to release in Taiwan and Hong Kong on November 2 and 8, respectively. Other than that, Hichki was screened at the Shanghai International Film Festival, as a part of the Belt and Road Week of the festival in June this year. Over the last few years, China has emerged as a flourishing market for Bollywood films. PadMan, Hindi Medium, Toilet: Ek Prem Katha, Secret Superstar and Bajrani Bhaijaan are some of the films, which premiered in China and did extremely well.
Promoted
Listen to the latest songs, only on JioSaavn.com