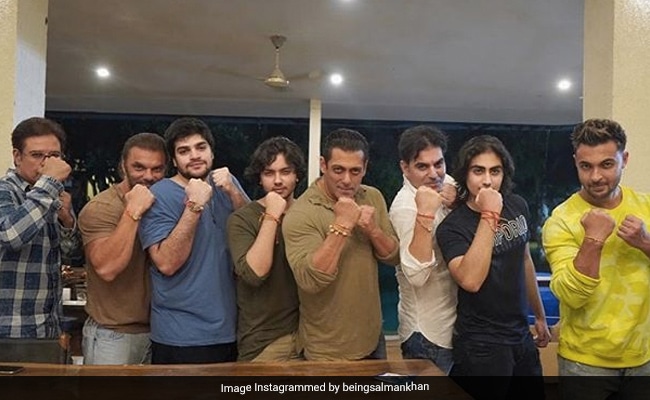 Salman Khan, who appears to be back in Mumbai from his Panvel farmhouse, shared glimpses of how the Khan-daan celebrated Raksha Bandhan on Monday. The Dabangg actor shared a few photos from the Rakhi celebrations at his Mumbai residence on Instagram and they really pack a punch. Posing with Salman Khan in the photos are the actor's brothers Sohail and Arbaaz. Salman's brothers-in-law - Atul Agnihotri, who is married to Salman's sister Alvira, and Aayush Sharma, who is Salman's sister Arpita Khan Sharma's husband - also feature in the photo. Sohail Khan's son Nirvaan, Arbaaz's son Arhaan and Atul Agnihotri's son Ayaan also star in the photo. "Happy Raksha Bandhan," Salman captioned it, in which each of them can be seen showing off their Rakhis to the camera.

Here's how Salman Khan and others celebrated Rakhi:

The Rakhi celebrations on August 3 coincided with Arpita Khan Sharma's birthday. Aayush Sharma dedicated this adorable post to his wife on her birthday: "Your birthday is a very special occasion for us as a family, Because we are celebrating the birth of a wonderful daughter, sister, wife, mother but more importantly an amazing human being." Arpita and Aayush are parents to a son named Ahil and daughter Ayat.

Here's wishing the strongest woman, I know a very Happy Birthday. From standing backstage while cheering my performance with tears in your eyes to standing by my side unconditionally when things were not shaping  up as planned. From the subtle appreciation to the loud private criticism. You have really played an important part in shaping the man that I 'm today.  So Thank you for coming into my life. You'll always be my strength Your birthday is a very special occasion for us as a family, Because we are celebrating the birth of a wonderful daughter,sister, wife, mother but more importantly an amazing human being. Love you Arpita.

Salman Khan spent the lockdown period at his Panvel farmhouse, where he was staying from before the country went into lockdown mode in March. For a few months, Salman was joined by his family members and friends such as Jacqueline Fernandez and Daisy Shah in Panvel. The 54-year-old actor recently wished his fans on Eid with a photo, which appears to have been clicked during his stay in Panvel.

Last seen in Dabangg 3, Salman Khan's upcoming films are Radhe and Kabhi Eid Kabhi Diwali. Salman Khan released the two songs Tere Bina and Pyar Karona during the lockdown period. Both the songs were entirely shot in his Panvel farmhouse.