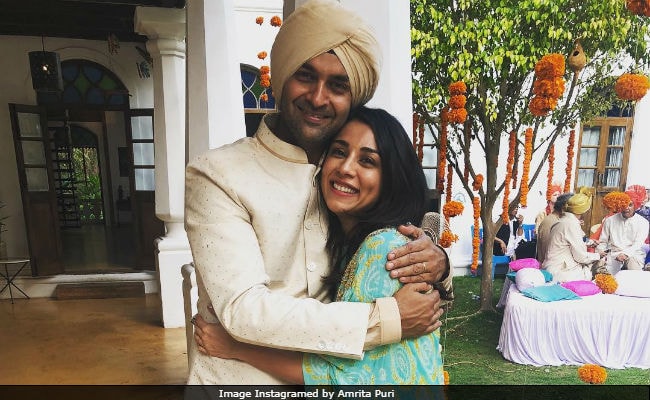 New Delhi: Sorry girls, but Purab Kohli is officially taken. The Rock On!! actor got married to his long-time British girlfriend Lucy Paton on February 15. His co-star from P.O.W: Bandi Yuddh Ke, actress Amrita Puri shared the news of his nuptials and a photograph of the groom on her Instagram. "My Sartaj Singh is hitched! Congratulations to my reel life husband! Wishing you all the love in the world @purab_kohli & Lucy Kohli #mandown #sartajsingh #POW," she wrote. Purab and Lucy got married in a private ceremony in Goa, which was attended by their close family and friends. Purab was dressed in a beige sherwani and a matching pagdi for the wedding.

My Sartaj Singh is hitched! Congratulations to my reel life husband! Wishing you all the love in the world @purab_kohli & Lucy Kohli #mandown #sartajsingh #pow

Purab and Lucy, a UK-based yoga teacher, are parents to two-year-old daughter Inaaya. Speaking of his decision to not getting married earlier, Purab had told Indian Express that he didn't want the child to think that her parents got married under the pressure of having her out of wedlock.

"There was pressure to get married. My mother was the most concerned and my family did say 'you guys have to get married quickly' when Lucy was pregnant. But I was adamant about not doing it because I never wanted my baby to feel that we got into a relationship because she was coming. Her coming into this world has transformed both our lives for the better. She is our love child and has bloomed even more love between both of us and made me love life more. I don't want her to ever feel that it was not meant to be. It was meant in every possible way and she was the force of nature and nothing could stop her from coming into this world," Indian Express quoted Purab as saying.

Speaking on fatherhood, Purab had told news agency IANS: "Fatherhood is a gift that I wish upon everybody and especially when it's a baby girl. When you have a child, you stop living for yourself. It's the most beautiful feeling."

Take a look at some of Purab's Instagram posts featuring his daughter Inaaya:

Promoted
Listen to the latest songs, only on JioSaavn.com
Congratulations Purab and Lucy! We wish you all the best.