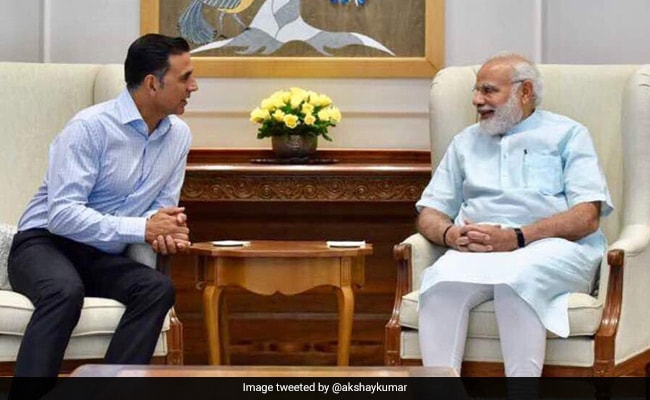 Prime Minister Narendra Modi, 68 today, has thanked actor Akshay Kumar for his birthday wish on Twitter, writing: "Akshay ji your gesture is heartwarming. I thank you for your wishes and all that you are doing for India. Your work towards furthering social empowerment is wonderful." PM Modi's reference to a 'heartwarming gesture' alludes to the actor's many social causes, several of which he champions in his films. Akshay's birthday tweet to PM Modi read: "Wishing the man with a vision, our honorable Prime Minister Narendra Modi a very happy birthday. Today I'd like to extend my heartfelt gratitude for supporting causes that are close to my heart. Thank you and wishing you a great year ahead."

In a video message accompanying his tweet, Akshay Kumar listed some of these causes - ending open defecation, promoting affordable sanitary napkins and providing financial help to the families of jawans.

Here's the Twitter exchange between Akshay Kumar and PM Modi:

Akshay Ji, your gesture is heartwarming. I thank you for your wishes and for all that you are doing for India! Your work towards furthering social empowerment is wonderful. https://t.co/TQ3QzN3itd

Last year, Akshay Kumar met PM Modi in Delhi ahead of the release of his film Toilet: Ek Prem Katha to brief him on its subject, the building of toilets, which meshed closely with the PM's Clean India campaign. Akshay tackled the issue of sanitary napkins in his film PadMan, released this year. Akshay, last seen in Gold, is currently working on Housefull 4, Kesari and Good News and has a big release in 2.0coming up.

Akshay Kumar is only one of several to have wished PM Modi on his birthday. Among others, actors Mohanlal and Abhishek Bachchan have posted messages on Twitter as has filmmaker Madhur Bhandarkar.