Oscars 2018: Priyanka Chopra, whom we've all but lost to Hollywood, made a blink-and-miss appearance as the nominations were announced 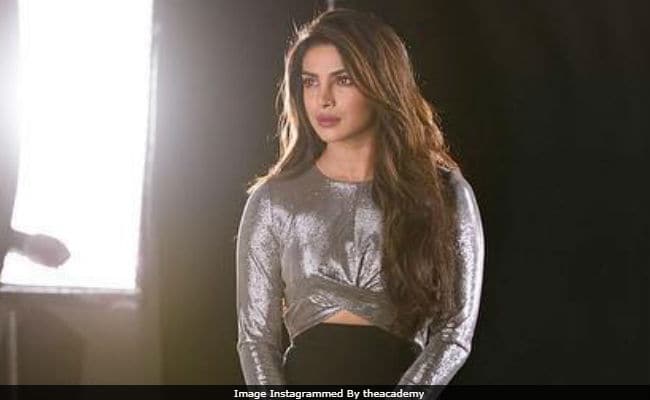 New Delhi: Actress Priyanka Chopra, whom we've all but lost to Hollywood, made a blink-and-miss appearance as the Oscar nominations were announced. She didn't, after all, actually announce the nominations - the honours were done by actors Andy Serkis and Tiffany Haddish - but she did star briefly in the introductory video for the Best Cinematography nominees. Well, that was disappointing. Anyway. Actresses appearing in the videos also included Salma Hayek, Michelle Rodriguez, Rebel Wilson, Michelle Yeoh and Rosario Dawson. The nominees for Best Cinematography this year are The Shape Of Water, Dunkirk, Blade Runner 2049, Darkest Hour and Mudbound.

Behind the scenes with Priyanka Chopra. Tune in to the #OscarNoms announcement on Tuesday at 5:22am PT.

Soon after the announcement, Priyanka tweeted this.

Thank you @TheAcademy for inviting me and all these amazing women into the fold. It's good to see you've included some guys too. https://t.co/tXrRGIkfby

While we aren't sure whether Priyanka will make it to the Oscars 2018 red carpet, here are some details about her previous appearances. She presented an Oscar in 2016 and attended as a guest last year.

For her maiden appearance, Priyanka stunned in a strapless white Zuhair Murad gown. Sophia Banks, who styled Priyanka, explained to mid-day in an interview, "White was an on-trend colour. That dress felt like love at first sight."

Priyanka Chopra turned heads in a strapless silver Ralph and Russo ensemble with a geometric pattern. She accessorised her look simply with stone earrings and cuffs. She greeted the paparazzi on the red carpet with a namaste.

Promoted
Listen to the latest songs, only on JioSaavn.com
Ahead of the Oscars 2018 nominations, Priyanka Chopra attended the Sundance Festival in Lake City, Utah, where her second Hollywood film A Kid Like Jake, was screened.

Priyanka Chopra is currently busy shooting for the third season of Quantico, her American TV show.