OK Computer Star Radhika Apte Was Missing Work, So She Did This 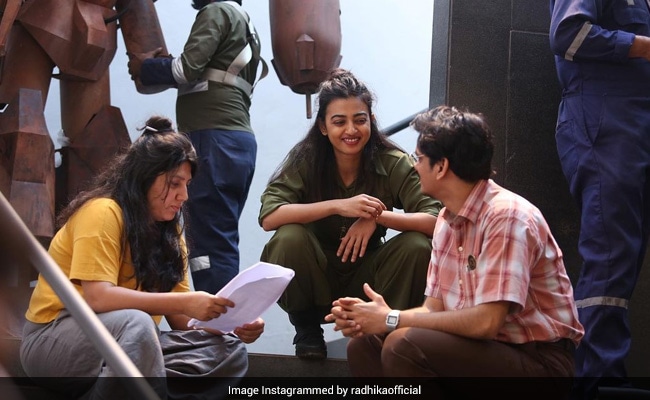 Radhika Apte is missing that fun time at work. The actress shared a behind-the-scenes picture from the sets of the upcoming series, OK Computer. Apart from Radhika, we could spot her co-star Vijay Varma and their director Pooja Shetty in the frame. And the captions read, "Morning coffees...discussing scenes...#miss #set #favthings #okcomputer @disneyplushotstarvip." The 35-year-old looks uber cool in an olive-green jumpsuit and with hair tied up in a half-bun. In the backdrop, one can see the team working on an artificial robot-like figure.

The Andhadhun actress has been sharing memories from the sets of this sci-fi comedy series. Radhika previously shared a few IGTV videos that helped fans dive into the peculiarity of the role. In one of the posts, Radhika introduced her character Laxmi Suri as, "The brilliant AI scientist behind PETER, ie, People For The Ethical Treatment of Every Robot. A mind as cutting-edge as the tech that surrounds her has led her to a simple truth: love thy robot. After all, it's only rational to be empathetic."

Speaking about his vision for the series, writer Anand Gandhi had said in an interview, "Pooja, Neil and I constantly asked, in such a situation, what would Charlie Chaplin, Jacques Tati or Govinda do? That's the mindset of the series which is wacky and zany. Imagine technology coming to a country like India, with its vastness and population, things take their own complex, emergent qualities. It can't be an immaculate, Kubrick-imagined precision; neat and tidy and engineered to perfection."