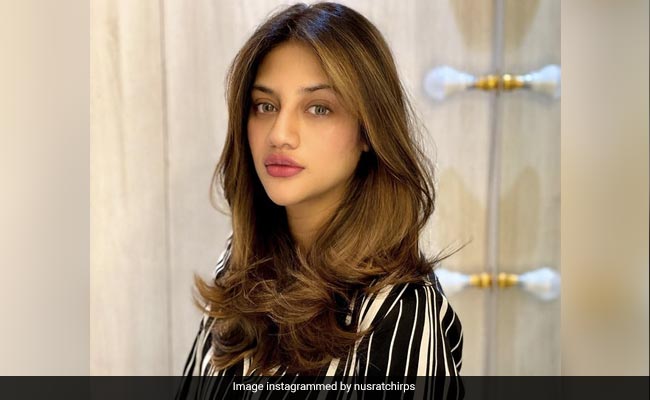 Actress-politician Nusrat Jahan is currently busy playing a "new role", one that of a new mom, in real life. The 31-year-old actress, who lives by her own rules, shared a glimpse of the new chapter in her life, in which she embraces motherhood. "Don't take criticism from people you won't take advice from," she wrote. On Instagram, Nusrat Jahan revealed she now sports a new look. Sharing a photo of herself, a week after she welcomed her baby son, Nusrat wrote: "New role, new mommy life, new look pic courtesy: Daddy." Nusrat Jahan and her estranged husband Nikhil Jain welcomed a baby boy on August 26.

On August 26, Nusrat Jahan gave birth to a baby boy at a private hospital in Kolkata, when Nikhil Jain said in a statement: "There may be differences between us but I am wishing the newborn and his mother all the best. I wish the baby boy has a bright future." The former couple have been estranged for some months now. Earlier this year, Nusrat Jahan said in a statement that her marriage was not valid under Indian law. Nusrat Jahan and Nikhil Jain had two wedding ceremonies in Turkey's Bodrum in 2019.

Meanwhile, ahead of the baby's arrival, Nusrat Jahan checked on to Instagram with a no make-up selfie, with this cryptic caption: "Faith over fear."

In terms of work, Nusrat Jahan is a Trinamool Congress MP and is best known for her roles in Bengali films such as Zulfiqar, Har Har Byomkesh, Ami Je Ke Tomar, Asur and Kelor Kirti.In 2019, then just-married Nusrat Jahan was criticised for wearing sindoor and choodha to the parliament after which she said in a statement: "I represent an inclusive India which is beyond the barriers of caste, creed and religion."