"I always believe that stories from Mahabharata are relevant to today's 'kalyuga' also," said Nitish Bharadwaj 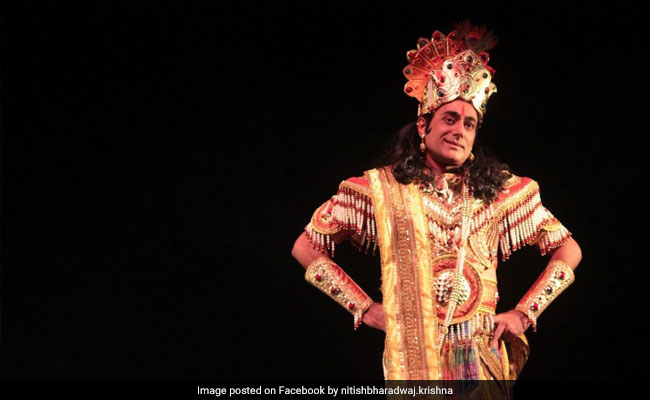 Actor Nitish Bharadwaj will be returning to the role that made him famous, Lord Krishna, it was announced rather appositely on Janmashtami, reports news agency IANS. Mr Bharadwaj, 56, played Krishna in B R Chopra's magnum opus - a TV adaptation of Mahabharat which ran on Doordarshan from 1988 to 1990. Now, almost 30 years later, Nitish Bharadwaj will play Krishna on stage, having been cast in the role in a play called Chakravyuh, directed by Atul Satya Koushik. Chakravyuh, opening in New Delhi this weekend, will apply the questions raised in the epic Mahabharat to modern life, as per IANS.

"I always believe that stories from Mahabharata are relevant to today's 'kalyuga' also," Nitish Bharadwaj told IANS, adding that he extensively read literature and books to understand Krishna's character for the B R Chopra-produced Mahabharat.

Mahabharat, directed by B R Chopra's son Ravi, was a television mega-event in the golden age of Doordarshan and made stars of several actors cast in primary roles - Nitish Bharadwaj as Krishna, Mukesh Khanna as Bhishma and Roopa Ganguly as Draupadi among them. Some Bollywood names were also included in massive line-up: Raj Babbar played Bharat, Goga Kapoor and Puneet Issar were cast as Kans and Duryodhan, Kiran Juneja and Bengali star Debashree Roy played Ganga and Satyavati. In addition, Dara Singh reprised his role as Hanuman from the preceding TV epic Ramayana.

Nitish Bharadwaj joined the BJP for a while and was elected to the Lok Sabha for a term. He was last seen on the big screen in 2018 film Kedarnath and before that in 2016's Mohenjo Daro, starring Hrithik Roshan.