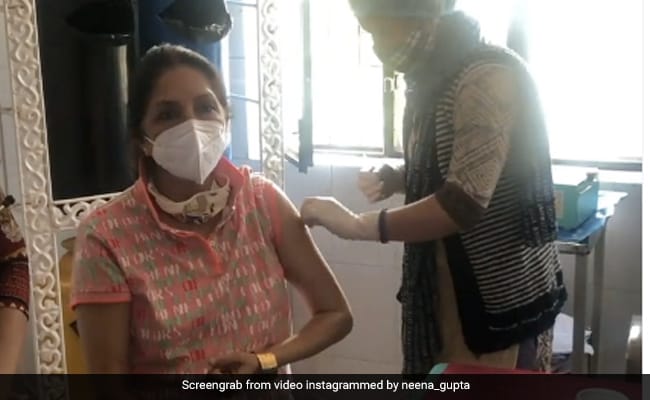 Neena Gupta in a still from the video she shared on Instagram. (Image courtesy: neena_gupta)

Actress Neena Gupta who left all of us in splits while getting her first dose of COVID-19 vaccine, on Saturday, got her second shot of the vaccine. The Badhaai Ho star got the vaccination done in Uttarakhand's Nainital where she is currently staying. All must remember the video that Neena Gupta had shared while getting her first dose of the vaccination. The actress was needle-shy and scared but in the most adorable way possible. But guess what? The actress is no more scared of the syringe. In fact, she got her second dose of the vaccination quite happily and shared a video with her fans on Instagram. In the video, Neena Gupta can be seen sitting and getting vaccinated while she tells everybody how she is not scared of the needle anymore.

"I am getting my second dose done, first dose you saw me how I was doing mummy and all that. Now, this dose I am not doing because, pehle me aise hi darr lag raha tha," she said in the video. Sharing the video on Instagram, the 61-year-old actress thanked Uttarakhand and lauded the "amazing neat and clean medical centre," where she went to get the vaccination. "Thank you Uttarakhand for amazing neat and clean medical centre with very courteous and helpful doctors and nurses," Neena Gupta wrote in the caption of the post.

Like her most other posts, Neena's this post too received scores of comments from her fans. The comments section of the actress' post was flooded with heart emojis.

The 61-year-old actress got the first dose of her coronavirus vaccine in early March. As mentioned above, Neena had shared a hilarious video of herself after getting vaccinated on social media. In the video, the actress could be seen very adorably expressing her honest reactions to the vaccine. She can be seen yelling "mummy" and announcing very openly that she was feeling scared. The video won several hearts and sent the Internet into a tizzy.

Neena Gupta, who had been living in Mumbai for professional reasons, recently moved back to her house in Nainital's Mukteshwar after new restrictions were announced in Maharashtra including a strict lockdown. Soon after reaching the hills, the actress shared a glimpse of her new life from the hills.