Mouni Roy Shares Pics OF Wedding To Suraj Nambiar: "I Found Him At Last"

After getting married, Mouni Roy has shared photos from her wedding with Suraj Nambiar 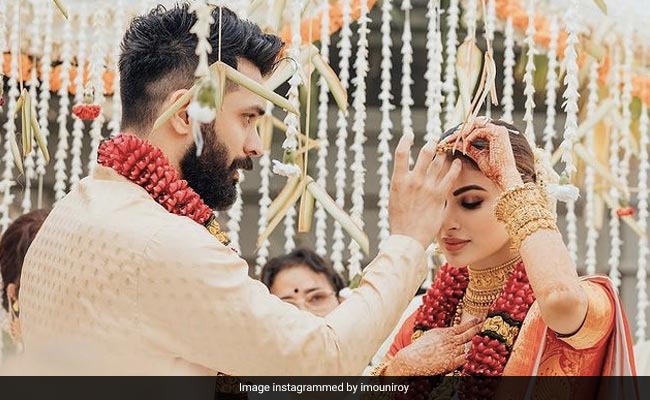 Newlyweds Mouni Roy and Suraj Nambiar have shared their official wedding announcement after marrying this morning in Goa. They posted a set of photos from the South Indian wedding ceremony; the pictures are of Suraj applying sindoor and adjusting Mouni's mangalsutra. There is also a glimpse of the varmala. Mouni Roy captioned her post: "I found him at last. Hand in hand, blessed by family and friends, we are married. Need your love and blessings." She added the wedding date. Suraj Nambiar wrote: "Married my best friend and the love of my life. Feel like the luckiest man in the alive."

Mouni Roy's friend Aashka Goradia, who was at the wedding with her husband Brent Goble, left a series of comments on the bride's post. "What a day today! So blessed to see this happen," she wrote in one and in another, "Forever and after." Congratulatory messages were also posted by Sophie Choudhry, Amit Sadh, Narayani Shastri, Disha Parmar, Aly Goni, Maniesh Paul and other celebrities.

Mouni Roy and Suraj Nambiar's wedding festivities were preceded by a haldi and a mehendi. She shared this picture from a pre-wedding festivity, captioned: "Everything."

Mouni Roy is known for roles in TV series like Naagin; she was seen on the big screen opposite Akshay Kumar in Gold. She has a role in the upcoming film Brahmastra, starring Ranbir Kapoor, Alia Bhatt and Amitabh Bachchan. Suraj Nambiar is a banker based in Dubai.