In his new memoir Then It Fell Apart, Moby claimed that he once dated actress Natalie Portman 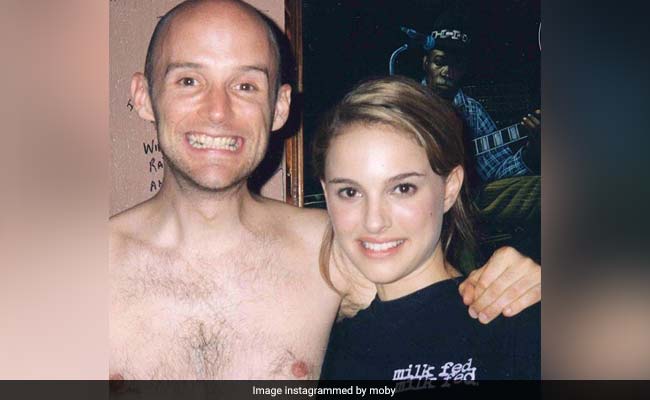 Moby claims in his new memoir Then It Fell Apart that he once dated Natalie Portman - back when the Academy Award-winning actress was a student at Harvard. The details were juicy enough to be excerpted by Entertainment Weekly: Natalie Portman was just 20 at the time, and Moby was 33. Even the musician acknowledges that the short-lived pairing seemed a bit unlikely, writing that their first meeting at a 1999 show he played in Austin, Texas, was "confusing."

"I was a bald binge drinker who lived in an apartment that smelled like mildew and old bricks, and Natalie Portman was a beautiful movie star," the now-sober Moby recalls. "But here she was in my dressing room, flirting with me."

But considering that Then It Fell Apart also includes the techno veteran's unsettling account of rubbing his genitals against a pre-presidency Donald Trump at a boozy party years ago, his brief romance with Portman ranks among the less startling claims in his book.

At least, it was among the less startling claims. That changed Tuesday when Harper's Bazaar UK published an interview with Portman, who denied ever having dated Moby:

" 'I was surprised to hear that he characterised the very short time that I knew him as dating because my recollection is a much older man being creepy with me when I just had graduated high school,' Portman told us. 'He said I was 20; I definitely wasn't. I was a teenager. I had just turned 18. There was no fact checking from him or his publisher - it almost feels deliberate. That he used this story to sell his book was very disturbing to me. It wasn't the case. There are many factual errors and inventions. I would have liked him or his publisher to reach out to fact check.'"

So, Moby says he dated Portman, but she says they didn't. Ouch! To be fair, many people can relate to being confused about their relationship status. But that wasn't the end of the story.

On Wednesday, Moby responded incredulously, posting a photo of himself and Portman to his Instagram account. In the photo, the musician is shirtless, his arm wrapped around a faintly smiling Portman. In the accompanying caption, he doubles down on his claim that they dated:

"I recently read a gossip piece wherein Natalie Portman said that we'd never dated. This confused me, as we did, in fact, date. And after briefly dating in 1999 we remained friends for years. I like Natalie, and I respect her intelligence and activism. But, to be honest, I can't figure out why she would actively misrepresent the truth about our(albeit brief)involvement. The story as laid out in my book Then It Fell Apart is accurate, with lots of corroborating photo evidence, etc. "Ps I completely respect Natalie's possible regret in dating me(to be fair, I would probably regret dating me, too), but it doesn't alter the actual facts of our brief romantic history."

As many social media users have pointed out, there are troubling aspects to Moby's statement. A magazine interview quoting a famous actress isn't a "gossip piece." How would any photo "corroborate" that two people dated? (The photo Moby shared on Wednesday only corroborates that he once took his shirt off and posed for a picture with a famous actress.)

In other cringe worthy lines, Moby insinuates that Portman is denying their "(albeit brief) involvement" because she "regrets" dating him. It's also odd that Moby - who also writes of attending a party with Portman after the 1999 MTV Video Music Awards, where he spun tunes in a gold lame suit as the event's house DJ - would respond without acknowledging the errors that Portman highlighted in her Harper's Bazaar interview.

At least one is provable with a quick Google search. The musician said they met in 1999 and his tour that year, in support of his well-received fifth album, Play, did include a planned stop in Austin. But Portman is right about her age at the time: Moby was slated to play that show in mid-August, two months after the actress turned 18.

News archives from that time also turned up a few articles that mention both Moby and Portman. In late August, Moby and his band played at Boston's Hatch Shell, where the Globe noted he "called his friend Nat - actress Natalie Portman, we learned - from the stage and had the crowd yell hi to her voice mail."

This is likely the "outdoor show" Moby mentions in Chapter 8 of his memoir, which intersperses his stories about Portman with his analysis of his anxieties around relationships. After the set, Moby informed his band and crew that he was going on a date with Portman:

"We held hands and wandered around Harvard, kissing under the centuries-old oak trees. At midnight she brought me to her dorm room and we lay down next to each other on her small bed. After she fell asleep I carefully extracted myself from her arms and took a taxi back to my hotel. And I started panicking."

Moby goes on to say that he "tried to assuage the panic with logic, telling myself that it was unwarranted, as I'd only been on a few dates with Natalie."

If our timeline holds up, that would be quite the whirlwind courtship for Moby and Portman to have had several dates between meeting in Austin and reuniting after the Boston show. And while Moby says that his VMAs after-party date with Portman happened "a week" after he and Portman met, MTV's awards show was held on September 9 that year.

Later that year, Portman reportedly caused a stir at Boston's Roxy Nightclub when she tried to get into a party headlined by Moby. Several outlets, including the Boston Globe, reported that Moby refused to go on if Portman was not let in despite being underage.

What do these scant news reports tell us? About as much as the picture Moby shared to his Instagram account. Moby and Portman appear to have hung out at least a handful of times, which is exactly what Portman told Harper's Bazaar, adding that she eventually concluded "that this was an older man who was interested in me in a way that felt inappropriate."

In Then It Fell Apart, Moby also claims to have dated actress Christina Ricci and Lizzy Grant, a budding musician who would later be known as Lana Del Rey. As Jezebel notes, Moby has a habit of saying he "tried to date" various women in his book.

"For a few weeks I had tried to be Natalie's boyfriend, but it hadn't worked out," Moby writes before detailing the moment he considers their breakup - in a phone call, she apparently told him "she'd met somebody else. I was relieved that I'd never have to tell her how damaged I was," Moby says.