Maska Movie Review: Manisha Koirala Is Endearing But The Netflix Film Lacks The Glow Of A Well-Baked Loaf Of Bread

Maska Review: Manisha Koirala, is unable to break free from the film's formulaic, staid construct and whip up a cinematic repast to savour 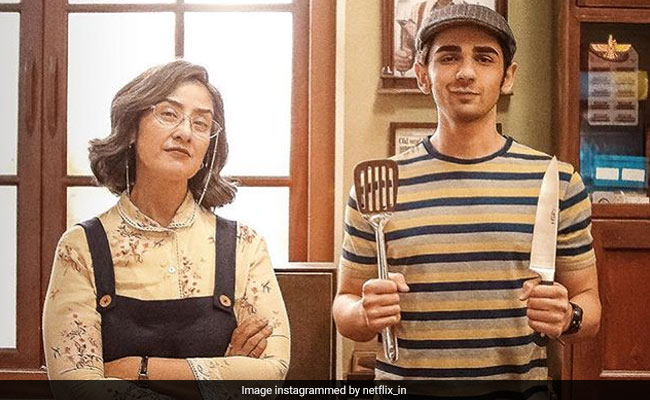 A still from Maska. (courtesy: netflix_in)

Fluff might be a desirable quality for a bun waiting to be lathered with butter and white cream, but for a movie that is seeking to drive away our lockdown blues it can serve only a limited purpose. While there is nothing overly unlikeable about Maska, screenwriter Neeraj Udhwani's directorial debut, the film does not brim over with irresistible delights either.

Playing one of the pivotal roles, Manisha Koirala is effortlessly endearing. She makes a fair fist of getting on top of her character's Parsi diction but is done in somewhat by a screenplay that skims the surface of the milieu it is set in.

Maska lacks the enticing glow of a well-baked loaf of bread or the reassuring warmth that a feel-good drama about a boy who wants to reach for the stars should have exuded. The layer of butter on the bun - represented by a lively soundtrack, which does step up to the plate at times - is unevenly spread.

Streaming on Netflix, Maska has Manisha Koirala in the role of a widow who keeps the family's Ballard Estate Irani cafe running after the death of her husband Rustom (Jaaved Jaffery). But the focal point of the story is the lady's 19-year-old son Rumi (Prit Kamani), who has Bollywood aspirations. He has little interest in taking over from his mom and carrying the legacy of several generations forward.

Maska has one foot in Diana's home and workplace, the other in the world of aspiring actors struggling to break into the movie industry and facing rejection by demanding casting directors. However, the film offers no real insights into either of the two domains that are integral to the city of Mumbai, preferring a convenient this-far-and-no-further approach in exploring the struggles of the two principal figures - a woman determined to cling on to the cafe and a teenager fixated on chasing his starry dreams.

When Rumi admits that, like most Parsi males, he is a mamma's boy, one cannot but be put off by the blatant shot at stereotyping. We soon figure out that the young guy does not know who Bahadur Shah Zafar is and that he thinks talaffuz (pronunciation) is the Urdu word for "table". But we are told he has magic in his fingers. So, it isn't difficult to see why he might not be cut out for the studio arc lights.

In one scene, during his first audition for a movie role, Rumi appears in the buff before a flabbergasted casting director (Abhishek Banerjee in a cameo) because he is meant to be a lover who has been caught red-handed making out with another man's wife "I'm a Method actor, Sir," he says coolly. Maska provides another brief flash of this irreverent spirit when a producer tells Rumi that the movie they will soon make together will be an honest effort, not Bollywood show-sha. But that is it. The rest of Maska is nowhere near shrugging off the grip of the conventional.

The male protagonist's dead dad, whose hand-me-downs are Rumi's birthday gifts, is the narrator for a part of the film. He then, all of a sudden, begins to appear in person and deliver pep talks to Rumi over matters concerning the heart and the libido. Of course, nobody else can see him. The narrative device that facilitates communication from beyond the grave is facilely explained away much later as something that is as normal as rustling up a Salli Keema, which Rumi is inherently adept at.

The inner world of the community of Parsi bakers/chefs at the heart of the plot remains largely outside the pale of this mother-son relationship drama. Cafe Rustom, the 100-year-old eatery whose cash counter is 'manned' with infectious enthusiasm by Diana, does not have the lived-in feel of a place that has been around since 1920, as the board at the entrance announces.

The lady is obviously ageing and is days away from going in for a knee-replacement surgery. When her son, despite his deceased father's sage advice, not only decides to drift away from his home and move in with his live-in girlfriend Mallika Chopra (Nikita Dutta), a Ludhiana girl who has seen more of the world than Rumi. She is a divorcee, has parted ways with her parents, and is now tantalisingly close to landing a lead role in a Hindi feature film provided a financier is quickly found.

Diana is understandably distraught. But she is in no mood to sell the cafe and let her son turn his back on the family bequest. She strikes up a rapport with a young girl from her own locality, Persis Mistry (Bollywood debutante Shirley Setia). The latter is working on a coffee-table book on Mumbai's Irani cafes and the matron whole-heartedly throws her weight behind her.

When Mallika is away for an outdoor shoot, a near-Platonic bonding develops between Rumi and Persis, who proceeds to expose him to the reasons why Rustom Cafe is worth fighting for. It is another matter that the storyline holds no surprises. Worse, it all turns awkwardly stilted and predictable as Rumi stumbles upon the Japanese concept of Ikagai (literally, "a reason for being"), thanks to Persis' pursuit of stories to buttress her belief that the Irani cafes are a veritable storehouse of memories.

His chats with Persis help the boy discover a matchmaker who has had a hundred per cent strike rate with matrimonial negotiations done at the cafe, a railway employee who never fails to stop by on his way back home, an old couple who has frequented the place since their first date there as teenagers, and a kitchen hand who arrived penniless in Mumbai from Uttar Pradesh four decades ago and stayed on to assist Rustom.

The bits and pieces of Maska that work do not eventually come together to deliver a convincing whole. Prit Kamani conveys the confusions of a teenager well enough. He is well supported by Nikita Dutta and Shirley Setia. But the cast, and this includes Manisha Koirala, is unable to break free from the film's formulaic, staid construct and whip up a cinematic repast to savour.