Mandira Bedi Shares Unseen Pic From Her Pregnancy Days: "When It Was A Bun In The Oven Time," Writes Actress 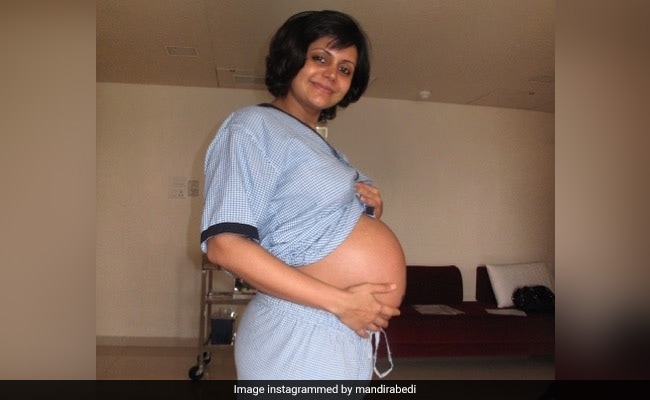 Actress Mandira Bedi, who gave birth to her son Vir in 2011, often shares pictures of him on Instagram. This time, Mandira took us back to her pregnancy days in her latest post on the platform. On Thursday night, the actress dropped an unseen throwback picture of herself from 2011 on her Instagram account. In the picture, pregnant Mandira can be seen cradling her baby bump in the hospital. The actress looks beautiful as she is flashing her smile in the frame. In her post, Mandira wrote a quirky caption that read, "Throwback to my best production ever!"

She added, "...To the time when being in hospital, also meant good things. When it was #bunintheoven time."

Mandira's BFF Mouni Roy dropped a comment on her post. Mouni posted a series of awestruck emojis and a few nazar amulet emojis.

Mandira Bedi's son Vir is frequently featured on her Instagram handle. See some of the posts here.

Mandira Bedi is married to Raj Kaushal, a filmmaker. They got married in 1999. The couple welcomed their son Vir on June 19, 2011, at the Lilavati Hospital, Mumbai. Mandira and Raj also have a daughter named Tara. They adopted Tara last year.

Apart from being an actress, Mandira Bedi is also a fitness enthusiast.