Malik Review: The film, helped along by lead actor Fahadh Faasil operating within an uncharacteristically limited yet effective bandwidth, hits its straps. 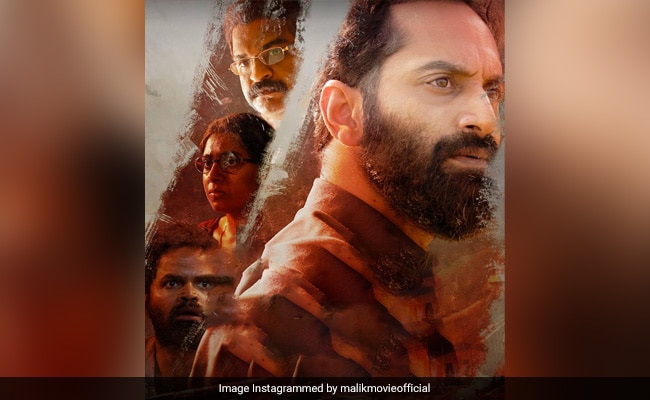 A sprawling saga of a Godfather-like figure who resorts to crime in a fight against the depredations of politicians, bureaucrats and policemen in his small coastal town, Malik, written, directed and edited by Mahesh Narayanan (Take Off, C U Soon) takes it owns time to fully reveal its hand. When it does, the film, helped along by lead actor Fahadh Faasil operating within an uncharacteristically limited yet effective bandwidth, hits its straps.

Malik, out on Amazon Prime Video, centres on Ahammadali Sulaiman, a school dropout whose guts put him in the crosshairs of the administration of his town, Ramadapally. He is no ordinary law-breaker. There is a clear method to his misdeeds. But he has to pay a price. His crusade against corruption and communalism turns friends into foes and exposes him and his family to extreme danger.

Sulaiman and his community are vulnerable to both Nature's fury and human machinations. A destructive cyclone is alluded to in the film's opening moments. Later on, the 2004 tsunami strikes. The damage the calamity causes is more than just physical. It drives a wedge between Muslims and Christians, the two communities that dominate the area. The resultant unrest hands the police and their political masters a chance to fish in troubled waters.

In a movie as long as this - Malik clocks in at 160 minutes - and given a storyline peopled by a large number of characters, a few slack passages are inevitable. However, with the screenplay hitting many a right button in crafting a commentary on our fractious times, the narrative pulsates with enough life to remain on the boil until the bitter end.

Sulaiman, notwithstanding his flawed means, is focused on protecting the people, and the fragile ecology, of his hometown. He is unmindful of the religious dynamics at play here. How long can he hold out when political forces move in to incite hatred to serve their narrow ends?

Politicians are out to make a killing from illegal sandmining and lucrative but ill-advised government projects. Those that stand to profit from the contracts advocate the building of a highway and a harbour in the environmentally sensitive area. Sulaiman stands in their way. The battlelines are thus drawn between an individual and the agents of state power.

One of the key themes of Malik is sectarian harmony. The marriage of Sulaiman and his best pal David's sister Roselyn causes no stir, a sure sign that religious identities are worn lightly in this neck of the woods.

The hero makes it a point to assure his Christian bride that "I won't ask you to cover your head or convert". Even when he says in the same breath that "I want to raise my children as Muslims", he does not forget to add: "I want your permission for that." The fine balance that Sulaiman aspires to in his life is, however, cruelly disturbed.

The film opens in an ageing Sulaiman's abode. Cinematographer Sanu John Varghese's camera weaves its way around the house in a way that is both dizzying and revelatory. It reflects the conflicting energies circling around the protagonist who has been written and played with a clear sense of the frailties that the human flesh is heir to.

Sulaiman is a hero to his people but he is keenly aware that not everything that he has done in life is above reproach. He has decided to renounce his "ungodly" activities and go on Haj. Family members, including his wife Roselyn (Nimisha Sajayan), express concerns about his safety. He says that he no longer has anybody to fear but God.

He is about to board the aircraft when he is stopped and taken into police custody. The 14-day remand period represents the present. The rest of the tale unfolds in the past - a time span of several decades in the life of a man forged in a raging fire.

A 17-year-old Freddy (Sanal Aman), the only son of Sulaiman's brother-in-law David Christudas (Vinay Fort), becomes the conduit for three flashbacks that serve to piece together an eventful story of friendship, courage, betrayal and tragedy.

The film goes all the way back to the early 1980s to trace the origins and subsequent rise of Sulaiman as a man blindly trusted by the townspeople. From indulging in small-time crime - mainly smuggling of foreign goods - and building a mini empire in Ramadapally, he begins to perform deeds that elevate him to the status of a saviour.

The grounds of the town's mosque where his own father is buried are used as a garbage dump. The mosque does not have the funds to build a wall. The place stinks. The imam (Salim Kumar) laments that people have stopped visiting the masjid. Had this been a temple, things would have different, he says.

Sulaiman swings into action. He convinces Sub-Collector Anwar Ali (Joju George) to clear the area for the building of a school. Sulaiman's stocks rise even higher when he commits murder - the victim is a rival who has grievously wronged the town as a whole.

He dares the sub-collector to capture him and take him away from the midst of his people. He is that sure of the support he enjoys. His righteous mother (Jalaja), exasperated with her son's ways, has other ideas. She testifies in court against Sulaiman.

Returning to Freddy, the wounded boy is in jail for hurling a bomb at his own school. The police, led by Circle Inspector George Zacharia (Indrans), conspire to use him as a pawn in their battle against Sulaiman. The film's script itself makes the most of the impressionable Freddy's presence in prison to take the story forward - or, to be precise, backward.

First, it is Sulaiman's mother (Jalaja), who tells Freddy why she does not see eye to eye with her son. This, the longest of the three flashbacks, provides the narrative its spine. It is then the turn of Freddy's father David to tell him how he, Sulaiman and Aboobacker (Dileesh Pothan) go back a long way.

Their bonding snaps as circumstances take a nasty turn in the wake of the chicanery that overruns the town and injects venom into the hearts of people. The shifting equations among the three men who were once thick as thieves not only echo macrocosmic realities, they also provide a measure of the deleterious effect that ambition, disaffection and violence have on individuals.

Finally, in the lead-up to the climax, Sulaiman, now in the same prison cell as Freddy, tells his side of the story to the boy. The structure has a neat quality that helps the writer-director knit multiple perspectives into a single, if somewhat stretched, tapestry.

Besides the fact that the younger avatars of Fahadh Faasil and Nimisha Sajayan are far less convincing than their older ones, the repeated leaps between the present and the past pose a few problems of comprehension. But, overall, it isn't difficult to stay invested in this portrait of a flawed Messiah.

Malik isn't always exhilarating but it is never less than watchable.

Toofaan Review: Despite Farhan Akhtar's Credible Performance, The Film's Bigger Punches Are All Below The Belt