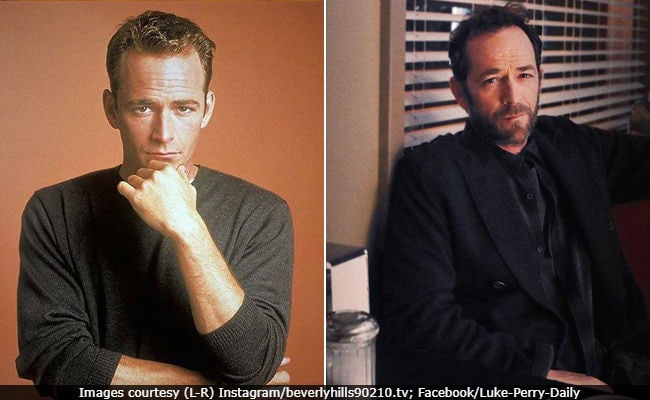 Like any new decade, the 1990s did not arrive fully formed. They came with a pile of the previous decade's holdovers - Milli Vanilli, Michael J. Fox, Madonna and the usual yawns. Grunge was but a distant rumor, as was the internet. What would be next? There were long lists of confident predictions, barely any of which came true, and probably none of which foresaw Luke Perry's sideburns.

It was a serviceable but noticeably parched moment in popular culture. Magazine covers, for their part, were constantly searching for the next James Dean. Was it Chris Isaak? River Phoenix? Was it the any of the young bucks from Twin Peaks?

For a brief but wonderful flash, we thought we found him in Luke Perry.

Perry, who died Monday at age 52 after suffering a stroke last week (leaving behind a quick and unwelcome chill of mortality across the nape of Generation X's collective neck), starred in Beverly Hills, 90210, a drama about high school that premiered in October 1990 and was an early hit for the still somewhat new Fox network.

90210 was one of those silly things that - for reasons that can never be replicated but are so much fun to talk about when they're happening - became a serious thing, appointment television. Aimed at teens, it had a campy allure for young adults. Even people in their 30s and 40s said (sheepishly at first) that you should try watching it, which was remarkable, because people in their 30s and 40s circa 1990 used to go out of their way to pretend that Gen X and its cultural appetites simply did not exist. (Even the moniker "Generation X," attributed to Douglas Coupland's 1991 novel, had yet to take hold.)

Before long, you could get college credit for deconstructing 90210. It arrived with such sturdy American high school archetypes, like pages ripped and rewritten from an old "Archie" comic book. These proto-teens were now in need of renewed, urgent scrutiny in a decade preoccupied with wealth, teen sex, abortion, drug abuse, the issues. 90210 was a fresh spin on the whole gang: The new kid, the nice girl, the mean girl, the prettiest girl, the surf hunk, the strident girl with glasses and, the one we were all thinking about Monday when news broke of Perry's death, the lone wolf on the motorcycle.

Dylan McKay, our new rebel without a cause. Perry was one of those guys who only needed the white T-shirt and faded Levi's - everything else was brought to you by the letters D, N and A: the glint in his caramel brown eyes, the sideways grin, the dimples. The scar through the right brow, the postmodern pompadour. The aforementioned sideburns. Perry's 90210 co-star Jason Priestley, who played Brandon Walsh, also had sideburns; boys and young men everywhere took instant note, because girls everywhere took note. And so it was sideburns, sideburns, sideburns, straight through the dawn of Friends and beyond.

That Perry was a 24-year-old man playing a moody teenage boy was of no matter - in fact, 90210 solidified the bizarre preference (in both audiences and producers) to have our high school students played by people in their 20s. What it lacks in verisimilitude it makes up for in the fictional ideal, the aspiration to beauty. How else to sell all those Stridex skin-care pads? How else to sell all those pairs of Guess jeans?

Here is the part where I ought to go deeper on Perry's character and his impact on the show, back to the Peach Pit as it were, and reference Dylan's words and deeds, and how or whether they mattered. I want to, but the point of these breaking celebrity-death tone poems is always this: The clock is ticking, and your time is short.

Dylan was with Brenda (Shannen Doherty) and then he was with Kelly (Jennie Garth) - in that order, correct? He had a drinking problem, yes? He had daddy issues, right? (A criminal dad?) Why do I remember the backstage spats more than the twists and turns of life at Beverly Hills High?

It seemed as if Dylan got all the intense scenes. It seemed like a living room full of chatty friends would fall silent whenever Dylan was on. Years away from high-def, he somehow seemed high-def. There was a moment when the entire country (and foreign viewers, too) had their eyes on Luke Perry's eyes. The new heartthrob! Was there more to him - a bona fide film star, perhaps?

We all had to know. On the cusp of 90210's second-season premiere, The Washington Post sent a Style reporter to Los Angeles to meet him at the Four Seasons and talk over breakfast. He was 20 minutes late and slid into the booth with such a perfectly casual nonchalance that it took a paragraph just to describe it. "This groggy morning, he's come in character, or maybe he is his character," wrote reporter Carla Hall. "He's all devil-may-care attitude and bad-boy flirt. If you're thirtysomething he's charming and fun. If you're 15, he drives you nuts."

He flashed, he fizzled, he left after six protracted seasons on the show. (90210 would persist until the end of the 1999-2000 TV season.) The hunt for the new James Dean never stopped, turning its attentions to Matt Damon and Matthew McConaughey. Perry appeared steadily in a variety of projects, thanks mainly to the Hallmark plan, where heartthrobs often go for honest work.

He lived long enough to travel full circle. Twenty-five years later, someone again ripped the pages out of an old Archie comic book, realized it's the Ur-stuff of American teenagedom, and came up with Riverdale, a dark retelling in which Archie Andrews (KJ Apa) and his friends cope with murder, violence, vengeful crime and active sex lives.

Perry took the part of Archie's hard-working single father, Fred - a handsome but perpetually wounded sort, given to occasional temptations, trying to do right by his kid. It was a meaningful performance from an actor who knew exactly what playing the role would represent: One minute you're it, hotter than anything, and before you know it, you're the one playing the dad.

Time gets weirder and warpier, still. Remakes and revivals and reboots and endless, endless nostalgia - where will it end? Last week Fox announced it was bringing back "90210" (which it has rebooted before) this summer, only this time with a cleverly meta twist. Six of the original cast members signed on to return and play "heightened versions" of themselves, i.e., actors who have been persuaded to reunite for an updating of the show that made them all famous. Drama, as they say, ensues. It sounds almost too meta to bear.

For whatever reason (Money? Scheduling conflict? Lack of interest? Dignity?) Luke Perry was not listed among those agreeing to return. As James Dean could tell us, what's cooler than being notably absent?

Luke Perry died on March 4 after suffering a stroke the week prior. He gained popularity in the early 1990s for his role as Dylan McKay in Beverly Hills, 90210.