Lorni - The Flaneur Review: In his first Khasi film, Adil Hussain dons the garb of a private eye who possesses a keen sense of Shillong's alleyways but struggles to land assignments. 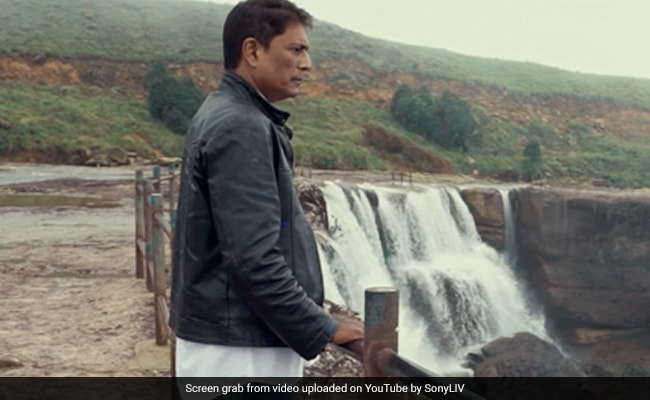 A still from Lorni - The Flaneur trailer. (courtesy: SonyLIV)

Shillong has no secrets, declares a key character in Wanphrang K. Diengdoh's Lorni - The Flaneur. But the quaint little hill town, as we see it in the Khasi-language film streaming on SonyLIV, is a veritable bundle of mysteries, a melange of myth and fable on one hand and flummoxing present-day ground realities on the other.

The screenplay and the meditative, observational rhythm of the narrative - the Shillong-based director is also the film's writer and editor - combine to impart an enigmatic, beguiling quality (in terms of both subject matter and structural externalities) to the idiosyncratic whodunnit that wends its way through a fascinating range of moods and moments.

On the face of it, Lorni - The Flaneur is about an investigation into a spate of robberies that hits Shillong. But also woven into the plot is the larger story of a culture caught between the past and the present, between the grip of unbroken tradition and the consequences of small-town angst triggered by the fast-expanding footprints of modernity. The mundane and the magical, the sordid and the sublime co-exist within the fictional register, which is about what has been lost and what can be salvaged and preserved, and in the real, identifiable physical spaces that it plays out in.

Amid growing internecine tensions fuelled by distrust between the indigenous tribal population and non-tribal outsiders, the personal and the political are played off against each other in a tale that seeks to capture the shifting dynamics driving the lives of disparate individuals and determining the evolution of a place grappling with rapid and frequently unsettling change.

The fears, misgivings and uncertainties that dog the town and its denizens are articulated to perfection by lead actor Adil Hussain. In his first Khasi film, he dons the garb of a private eye who possesses a keen sense of Shillong's localities and alleyways but struggles to land assignments.

Hussain slips into the skin and soul of a wide-eyed drifter with consummate ease and delineates the man's inner world with unwavering precision and solidity.

Apart from a host of local actors, several of them first-timers but all of them understandably at complete ease with the world that they inhabit, Hussain shares screen space with Shillong. The town is not a mere setting in which the story unfolds. It assumes the dimensions of a full-blown character that gradually reveals its variable shades and nuances to impact the fortunes of the men and women who people Lorni - The Flaneur.

As he goes through the motions of biding his time, guzzling tea, playing cards or merely observing people in silence, Detective Shemlut Diengdoh (Hussain) is alerted by Esther (Dawait Syiem), who is temporarily back in her hometown, about a burglary in the bungalow of her recently widowed mother, Dolores (Yonda Marbaniang). Shem feigns that he has little time to spare but, without having to be coaxed, accepts the job to investigate the robbery.

An antique coral necklace has gone missing and Dolores believes Shem is the only man in Shillong who can find out who is behind the theft. The reason: nobody knows Shillong as well as he does. But the case isn't as simple as it seems at first flush. More robberies follow and matters take an extremely complicated, even dangerous, turn for Shem.

In the course of one of his increasingly intense encounters with Esther in a bar where women are not allowed in - the lady sports a cap to conceal her gender - Shem says he does not like surprises. "I like things to be banal, just like Shillong," he adds in English, the language that the two always communicate in. Between the capricious and the profound, lies an expanse of haze that the film negotiates as it moves the story forward and, in the process, proffers insights into the town, its people and their cultural mores.

On the personal front, the sleuth has to deal with the lingering repercussions of a tragedy that is alluded to in the film's opening sequence but not revealed in its totality until much later. Esther, too, has her own set of problems to reckon with in a town where, as she herself says to Shem, "everyone knows everyone else". But is that really true?

A bunch of younger men who frequent a watering hole across the street from Shem's home - among them is a voluble local journalist (Lumbor Mawsar), a repository of a great of deal of information - hold forth on everything from a mythical monster on the loose to Cristiano Ronaldo's peerless skills, the allure of Khasi folklore to the work that one of the men, Jay (Elizer Baren), does to photograph people and places out here.

Shem drifts through the small town on his scooter or on foot, scouring its nooks and crannies for leads that can help him nab the necklace thief and repay the trust that Esther's mother has reposed in him. His struggles to justify his existence and relevance as an investigator is forever under a cloud, but he makes it a point not to let on that not only is work not easy to come by, he is also not any closer to cracking the case than when he started out.

The robbery of the article of great cultural worth that kicks off Shem's probe denotes what is happening to the town and its inimitable ethos in the larger context of its roots and defining features, and in relation to its parables and songs (the film features a lovely complement of the locally-produced music on the soundtrack).

Like the town itself, every character orbiting around Shem has stories to tell. The chatty journo is an endless fount. An artist and a folklorist, the scribe's drinking mates, contribute their mite to the experiential tapestry of the intriguing and disturbing that Lorni - The Flaneur adds up to.

Offbeat, personal filmmaking that skirts around the cliches that essays such as this often stray into, Lorni - The Flaneur is worth watching as much for the Adil Hussain masterclass at its heart as for the unique directorial sleights that bring alive a town enveloped in a mist.