London Files Review: Arjun Rampal As A Brooding Detective Is Hard-Pressed To Lift The Series

London Files Review: Purab Kohli is not even given an opportunity to have a go at giving the show a modicum of energy. This tale of two dead-end daddies is, therefore, doomed to a dismal destiny. 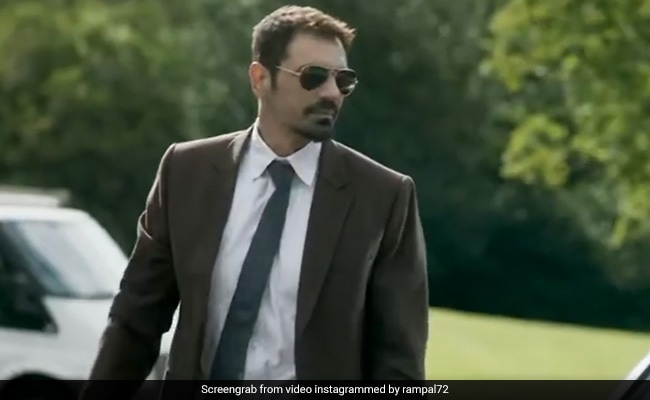 Two unrelated youngsters, a boy and a girl, are among the principal characters in London Files, directed by Sachin Pathak and written by Prateek Payodhi. They have fathers who they are at odds with. But the dark investigative thriller isn't about children with daddy issues. It is about daddies with issues.

One of the fathers is a London police investigator stuck in a rut, the other a media mogul with the power to sway government decisions. Their paths cross when the latter's rebellious daughter, a college student, goes missing. A body of a girl, with her face smashed and a burn mark around her navel, is soon fished out of a lake. The cop believes the case is as good as over.

The next thing he knows is that this is anything but an open and shut case. The duo of dads has way too much going in their lives to make the search for a resolution a cakewalk. The mystery of the missing girl compels the detective to descend to the gutters, literally so, to look for the truth.

The six-episode Voot Select series, produced by JAR Pictures, Ajay G. Rai and Mohit Chhabra, banks upon Arjun Rampal in the role of a brooding detective, Om Singh, whose life has hit the skids. Forever floundering in a sea of sighs, the man looks blankly at the camera, takes deep breaths, vapes incessantly, and makes heavy weather of just about everything he does.

Detective Om Singh is weighed down by the brutal blows that life has subjected him to. When the new case lands on his lap, he wastes no time in pointing an accusatory finger at the complainant, the girl's father, Amar Roy (Purab Kohli).

The suave entrepreneur who has rubbed a whole lot of people up the wrong way because of his television channel's vociferous support to a stringent anti-immigration bill. Om's boss, Ranjh Randhawa (Sagar Aarya), ticks him off for jumping the gun.

Not that the audience needs to be told that the first suspect in a mystery thriller such as London Files is only meant to be a red herring. Amar Roy is in here only to get the sullen sleuth started. He soon finds himself on a wild goose chase that is both ponderous and intense.

Amar's daughter, Maya (Medha Rana), we learn in the aftermath of her disappearance, never saw eye to eye with her dad and lived away from the family in a college hostel. Her roommate is Carol (Shanice Archer), an immigrant whose shadowy ways strengthen Om's suspicion that Amar is responsible for Maya's disappearance.

In its attempt to deepen the darkness that envelopes the characters, London Files opts for a single-note portrayal of the scars on the soul of Om Singh, a failed husband, a failed father and a failed professional. His ex-wife Ashwini (Sapna Pabbi in a cameo) has moved on. His teenage son Yash (Manvir Bawa) is in jail, serving time for a terrible crime he committed at his school. And at work, Om constantly ruffles the feathers of his immediate superior.

A psychologically scalded Om - some still call him "Father of Satan" - is on therapy and meds, but he skips both with impunity to his own detriment. His whimsical handling of the Maya Roy case complicates matters even further because he begins to believe that the fate of his son is somehow linked to the fate that has befallen the girl.

Does London Files present a political portrait of immigrant ire at a time when the world is in the middle of great tumult? Not at all. It simply isn't interested in the bigger picture. The series is too preoccupied with two faltering fathers figuring out their flaws to notice the larger realities of the universe.

What London Files does instead is veer off, in a grotesque twist, into the world of a cult leader Gopi (played by Gopal Datt, who is credited with contributing additional dialogues to the show) who works his flock up into a frenzy. They gear up to rebel against the established social order because they believe in a slogan they parrot religiously: "Only after absolute chaos comes absolute silence".

The flighty guru does not stop at his chaos and silence theory. He weaves other grand ideas around privilege and privation and oppression and resistance. His assertions are simple enough - the palaces and parliaments that the ruling classes have built, he says, stand on the broken dreams of the oppressed.

He delivers his sermons in a sewer-tunnel network under the city, which is obviously meant to be a literal metaphor for a nether world peopled by rebels that are too insignificant to be visible. The recesses of Om Singh's mind are as dark as the underground maze occupied by Gopi and his followers. The detective says: "I thought by solving this case I'll understand Yash better. But nothing makes sense anymore." Spot on.

Just as Om Singh is nowhere near wrapping his ahead around the troubles that his son is in, the audience is befuddled no end because the show, despite the detective's repeated requests to his colleagues, never "cuts to the chase".

One element in the London Files that does not beat about the bush centres on Om Singh's approach to his role as a single father. In one scene, he asserts to a friend that his son "will not be a weakling". But he also admits at another point that his being good at his job as a cop could not help him save his son.

Not much else in London Files can escape the dull haze that hangs on the protagonist and the he drives. The thriller meanders to a facile climax in which the cop transforms himself into the principal negotiator between an angry band of rebels bent on blowing up a building and a police force that has disowned him.

By the time the show reaches this point, it is as clear daylight that those in the dregs are a world apart from those that are in the driving seat. London Files ends with a battle that serves no purpose. It advocates a convenient brand of pacifism that smells of status quo-ism. To be fair, the makers of the series do not, at any point, promise otherwise.

Arjun Rampal is hard-pressed to lift London Files out of the morass it is stuck in. Purab Kohli is not even given an opportunity to have a go at giving the show a modicum of energy. This tale of two dead-end daddies is, therefore, doomed to a dismal destiny.

Thinking Of Him Review: Rabindranath Tagore Is Played Superbly By Victor Banerjee