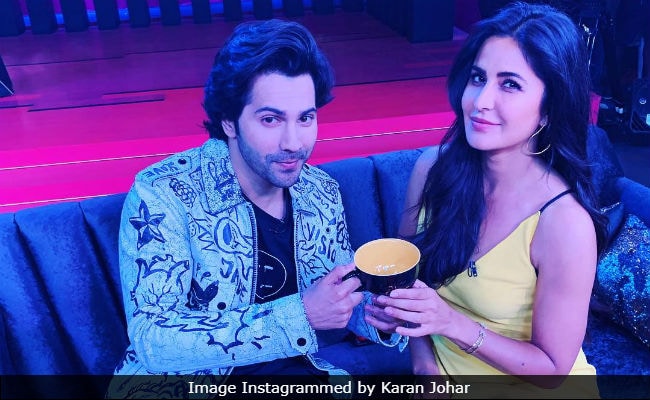 Katrina Kaif and Varun Dhawan were the special guests for the fourth episode of Karan Johar's popular talk show Koffee With Karan 6 and they totally nailed it. Katrina and Varun, who will be sharing screen space ABCD 3, were prodded to talk about their personal relationships, their contemporaries, their marriage plans, their equation with each other and of course, the "I Hate Katrina Kaif Club", which was arguably one of the best segments of tonight's episode. For those who don't know, the existence of the club was ousted during an episode of Koffee With Karan 5, wherein Katrina revealed that Varun and Arjun Kapoor started the club after Salman Khan gave him a hard time for checking her out.

Much to Katrina's dismay, the actual reason behind starting the club was not because Arjun and Varun were crushing on her but because the actor's were not getting enough attention from Salman Khan, who, at that time was filming Maine Pyar Kyun Kia with Katrina.

Aapki Shaadi Kab Ho Rahi Hai? This is the question that Varun Dhwan would have asked Alia Bhatt, Ranveer Singh and every other actor, if her were a member of the paparazzi. Needless to say, both Katrina and Karan couldn't stop laughing at Varun's epic come back. When KJo asked his guests about their take on the wedding season in Bollywood, Varun jokingly said, "Will we be invited?" Katrina, on the other hand revealed that she was extremely excited especially about "dressing up."

Well, the Bollywood wedding season is definitely here, and member of the paparazzi @Varun_dvn is on point! #KoffeeWithKaran#KoffeeWithKatrina#KoffeeWithVarunpic.twitter.com/cgRj0DRlXD

The Various Moods of Katrina Kaif

Mini Mathur showcased the various mood of Katrina Kaif and that was just hilarious. Mini did a great impression of Katrina and needless to say, Katrina, Varun and KJo burst out laughing.

The Tiger Zinda Hai actress shared her idea of love and said, "You somehow always judge yourself based on how much love or attention you're getting from your partner. Your relationship suffers just a little bit, and your self esteem and your image take a beating, which is not a good thing." She jokingly said that its funny how the "last single actress" is sharing love advice.

Do's And Don'ts By Salman Khan

This was another segment that caught our attention the most. A special video was played which featured Katrina's Bharat co-star Salman Khan, who revealed a lot of things about Katrina. For starters, Salman said that Katrina Kaif can be quite a perfectionist. He said, Katrina can practice for six hours a day and that is extremely difficult to match upto to her level.

When Varun Got Emotional

Varun Dhawan is extremely close to his parents and the Badlapur actor got extremely emotion after he saw a video of his parents, in which they shared a few of the actor's secrets from his school days, citing the example of how he would get his home work done by his classmates, or hide mobile phones in his pants. Varun's filmmaker father David Dhawan also expressed his love at the end of the video, which left Varun a bit-teary.

The Rapid Fire Round

KJo wanted rapid and fiery answers, and he got some, most of them from Varun, who went home with the hamper. The actor also won the Game On Round like a boss. Earlier on the episode, Katrina and Varun hosted the show for a few minutes and said that she wanted to "sound intelligent."

We are expecting actors father-daughter duo Sara Ali Khan and Sif Ali Khan in the coming episode of Koffee With Karan 6. Excited much?