Kesari: Akshay Kumar Gets To Try Out His Kickboxing Skills With BSF Jawans 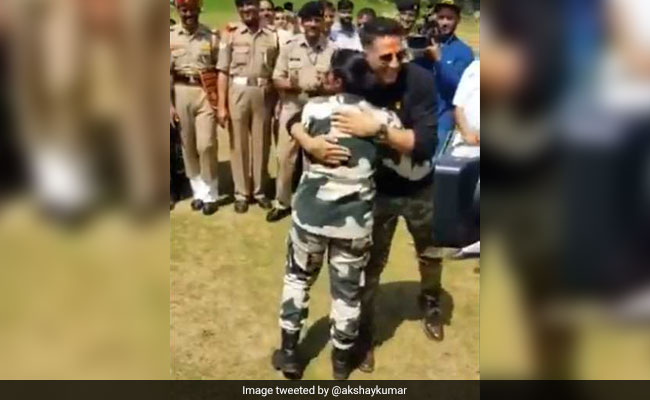 Akshay Kumar in a still from the video.(Image courtesy: akshaykumar

Akshay Kumar, who has mastered several forms of martial arts, posted a video of himself showcasing a few kickboxing moves on his Instagram and Twitter profiles. In case you are wondering what's new in the video, we must tell you that the actor can be seen showcasing kickboxing moves along with BSF jawans. Akshay, who is currently busy with the promotional duties of his upcoming film Kesari, met BSF (Border Security Force) soldiers in Delhi and he shared a video from the session on social media on Tuesday and he captioned it: "Always a treat to meet the Jawans from BSF India."Akshay summed up his meeting as a "learning experience" and wrote: "Their training, passion and enthusiasm is top-notch, always a learning experience." The video received over 6 lakh likes on Instagram within an hour.

Always a treat to meet the Jawans from @bsf_india. Their training, passion and enthusiasm is top-notch, always a learning experience.

Videos from the session have been curated by several fan clubs. In one of the videos, Akshay and Parineeti can be seen dancing to Kesari songs with the soldiers. Take a look at the video here:

Akshay Kumar, in an interview with news agency IANS earlier this month, said that Kesari is an "educational" film and wrote: "So, I would like to urge all the parents to show the film to their children. Our youngsters should know about our war heroes. This is also an educational film. It is a true incident and based on real characters."

Kesari is against the backdrop of the Battle of Saragarhi, which took place in 1897, as a part of which 21 Sikh soldiers of the British Indian Army fought against 10,000 Afghan invaders.

Besides Akshay and Parineeti Chopra, Kesari also features Mir Sarwar, Vansh Bhardwaj and Jaspreet Singh in pivotal roles. Kesari has been directed by Anurag Singh and it has collaboratively been produced by Cape of Good Hope Films and Karan Johar's Dharma Productions. The film will open in theaters on March 21.