Kaun Banegi Shikharwati Review: Naseeruddin Shah, Lara Dutta and Soha Ali Khan have the key roles, but it is Raghubir Yadav, playing the king's principal troubleshooter, who often runs away with the show. 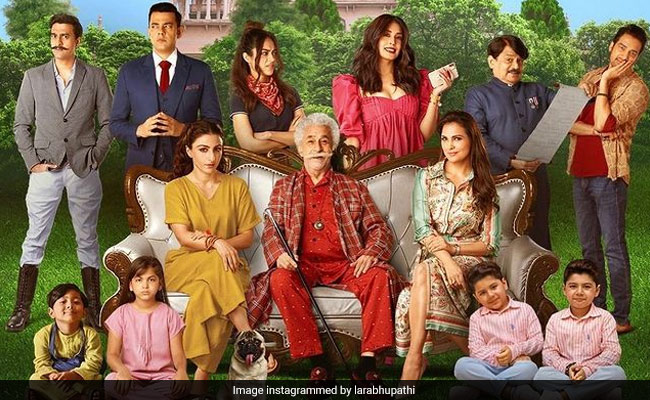 An eccentric ruler of a kingdom gone to seed and his four oddball daughters who have drifted apart constitute the crux of Kaun Banegi Shikharwati, a patchy dramedy that, even at its lowest ebb, is agreeably flip. It seeks to mine quirky humour from a whimsical king's desperate bid to keep his flock together and save his decaying palace, but an outright laugh riot eludes the show. It is a mildly diverting, inoffensive parody of the repercussions of power wielded without responsibility.

The Zee5 original series, featuring by Naseeruddin Shah, Lara Dutta and Soha Ali Khan in stellar roles, oscillates between the droll and the emotional. Mercifully, lightness of touch keeps the tale rolling at a fair clip despite the many wobbles that it runs into along the way.

The king, who has no income, has run up huge wealth tax arrears, having ignored government notices for years. His palace is on the verge of being seized. A lawyer suggests that he put royal property up for sale. A trusted royal aide dissuades the king. They hatch an alternative plan to save the palace. The king fakes a terminal illness and draws the estranged daughters back to their childhood home and pits them against each other in a series of royal contests to choose his successor. How that is going to help the monarch clear the government dues is not clear.

The girls, who left home in a huff six years ago, are not on talking terms anymore. The old man hopes his crazy reunion plan will lead to the bickering siblings sinking their differences and bonding the way they did when their mother was alive.

The girls arrive at the palace and the games begin. The king's friend and adviser (Raghubir Yadav) thinks up competitions linked to the navarasa theory of nine emotions. But the games are no fun - the face-offs reignite tensions between the four sisters as their vulnerabilities, pretenses and idiosyncrasies come to the fore and muddy the waters all over again. Can the girls put raudra (anger) and bhayanaka (fear) behind them and find shantha (peace)?

That is the question at the heart of the 10-episode series. The show banks upon the redoubtable skills of Naseeruddin Shah and Raghubir Yadav to help it tide over its drearier moments. The sustained good-humoured wackiness of the tale, too, contributes its mite to the task of papering over the less appealing parts of the show.

Lara Dutta, Soha Ali Khan, Kritika Kamra and Anya Singh, playing women who have to reckon with a slew of prickly, unresolved issues that stem from their past, shape their present and threaten to impact their future, provide the show its girl-power core. If one is a control freak who cannot brook anything that is amiss around her, another is an embodiment of rehearsed tranquility. One is a flighty and chirpy girl who, by her own admission, has no skills but is in love with the idea of being famous, another is a creatively inclined introvert who struggles to express herself.

The girls' deceased mom (Charu Shankar, seen only in flashbacks) looms over their lives. A statue of the dead queen stands on the palace grounds. The lady is sorely missed. But it is the king's writ that runs here. He makes laws on the go without so much as a by-your-leave. Democracy bekaar cheez hai (democracy is useless), he declares even as he deigns to indulge in some mann ki baat with his daughters.

An exclusive audience with the king is a privilege, not a matter of right. It's got to be earned. No wonder the kingdom of Shikharwati is in the doldrums. A young man (Anurag Sinha), a part of Shikharwati's dwindling population, points out to the king and to anyone willing to lend him an ear (among them is one of the princesses) that craftsmen are deserting the village for lack of opportunities and defecting to the neighbouring kingdom of Mewar. The stubborn king ignores the writing on the wall.

As the story wends its way towards the climax, Kaun Banegi Shikharwati, jointly directed by Gauravv K. Chawla and scriptwriter Ananya Banerjee, gathers a degree of momentum. The twin threats of a Dubai don and an undercover income-tax sleuth, which have been hanging over the palace for long, hits home. The Shikharwati girls, oblivious to the troubles eddying around them, continue to take potshots at each other.

The prince of a rival kingdom (Varun Thakur) worms his way into the palace, a Shikharwati commoner takes it upon himself to keep the king in the loop about how his subjects feel about their depleting resources and the royal adviser does his best to save the people and their ruler from ruin.

In the royal household, the princesses do not make things any easier for themselves and the king. The eldest, Devyani (Dutta), has her hands full. Her husband (Cyrus Sahukar) owes a mafia don more money than they can rustle up. The second daughter, Gayatri (Khan), a dancer and a member of a spiritual commune, nurtures her share of secrets surrounding her two adoptive children. Her daughter is a psychic who can divine the future. The king is mighty impressed by her unfailing clairvoyance.

The third sister, Kamini (Kamra), Princess Kaa to her two million social media followers, is a minor celeb who puts her foot in the mouth at a poverty eradication campaign event and ends up in the dumps. The youngest, Uma, is a painfully shy gamer looking for funding for a game she has designed. Her severe allergies prevent her from stepping into the limelight and pitching her creative ideas to potential investors.

Naseeruddin Shah, Lara Dutta and Soha Ali Khan have the key roles, but it is Raghubir Yadav, playing the king's principal troubleshooter, who often runs away with the show. He slips into the skin of the character and the screwball spirit of the tale with effortless ease and complements Shah's breezy performance as the miserly ruler, which anchors Kaun Banegi Shikharwati. While the two veterans hold the series together - it does need all their acumen - the four lead actresses do not lag behind. Essaying the liveliest of the four roles, Kritika Kamra makes the strongest impression.

Kaun Banegi Shikharwati does not scale any peak but it is entertaining enough not to sink into the sort of drudgery it cannot find its way out of with a little bit of help from the actors.