Irrfan Khan's Son Babil Reflects: "My Father Was Defeated At The Box Office By Hunks With Six Pack Abs"

"Before I went to film school, he warned me that I'll have to prove myself as Bollywood is seldom respected in world cinema," Babil wrote in his post 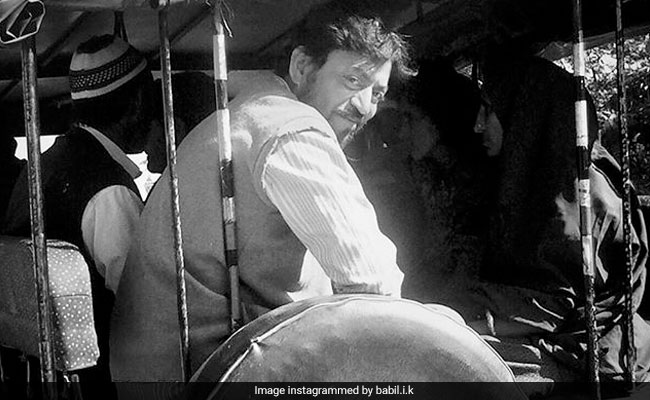 Irrfan Khan's son Babil, in an introspective kind of a mood, talked about how his father attempted to change the way Bollywood is perceived with his work. He also shared an important lesson he learnt from Irrfan Khan, which helped him as someone studying film in London. Sharing a childhood memory of himself and dad Irrfan, Babil wrote: "You know one of the most important things my father taught me as a student of cinema? Before I went to film school, he warned me that I'll have to prove myself as Bollywood is seldom respected in world cinema and at these moments I must inform about the Indian cinema that's beyond our controlled Bollywood. Unfortunately, it did happen."

Talking about his experience at film school, Babil wrote: "Bollywood was not respected, no awareness of 60s' - 90s' Indian cinema or credibility of opinion. There was literally one single lecture in the world cinema segment about Indian cinema called 'Bollywood and Beyond', that too gone through in a class full of chuckles. It was tough to even get a sensible conversation about the real Indian cinema of Satyajit Ray and K Asif going. You know why that is? Because we, as the Indian audience, refused to evolve."

Referring to Irrfan Khan's critically acclaimed legacy of work, Babil wrote how the late actor tried to blur the boundaries of traditional Bollywood films: "My father gave his life trying to elevate the art of acting in the adverse conditions of noughties Bollywood and alas, for almost all of his journey, was defeated at the box office by hunks with six pack abs delivering theatrical one-liners and defying the laws of physics and reality, photoshopped item songs, just blatant sexism and same-old conventional representations of patriarchy (and you must understand, to be defeated at the box office means that majority of the investment in Bollywood would be going to the winners, engulfing us in a vicious circle)." Irrfan Khan died in Mumbai on April 29. He was 53.

It's still not settling in. We've lost two very sincere people and sincerity is key in our spiritual journey, thus it comes as an unbelievable shock, the way Sushant has departed. Naturally, we have descended into pinning the blame on something or someone, which in itself is the most futile act because to find peace by playing the blame game is not honest peace, it is a fleeting reflection of a lie. I urge you to not blame someone or something for this incredibly unfortunate happening, I urge you to accept that life is filled with leg spin deliveries bouncing off spin with no apparent explanation or understanding provided, I urge you to stop investigating the reason because it only brings more despair to the people intimately suffering the loss. Instead we must celebrate the evolution of these sincere men and let their wisdom manifest in our own journeys in some way, hoping to keep little lanterns of their memories ignited in our sensitive souls. I'm saying stand up for what's right without using Sushant's demise as an excuse, if you want to rebel against nepotism, do so, but don't use Sushant as a reason to why you're doing so now. Stand up for what's right regardless anyway in any case. (And it would and should be my fight to prove to the audience that I deserve a shot.)

Irrfan Khan's impressive filmography includes Hollywood films such as Inferno, Jurassic World and The Amazing Spider-Man. He also starred in award-winning English films such as The Life Of Pi, The Namesake and Slumdog Millionaire. Irrfan Khan was best known for his roles in movies like The Lunchbox, Piku, Hindi Medium, Haider, Paan Singh Tomar and Maqbool, among others.

Irrfan Khan was diagnosed with cancer in 2018, after which he took a break from acting as he underwent treatment in London. He returned to India for filming Angrezi Medium but didn't attend the promotions. Directed by Homi Adajania, Angrezi Medium remains Irrfan's last movie.