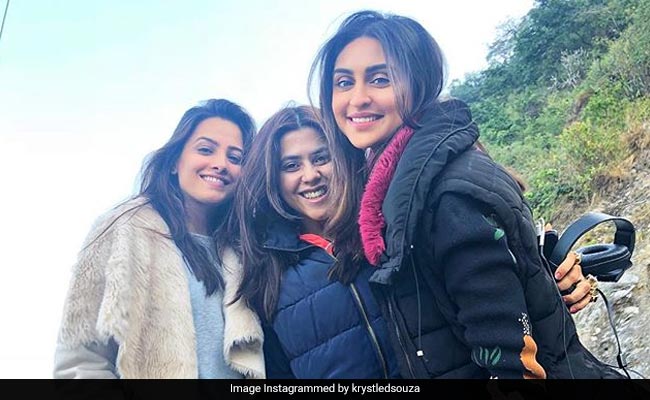 TV czarina Ekta Kapoor is having a blast with her girl gang including Krystle D'Souza and Anita Hassanandani in Hrishikesh. Ekta arrived in the city with her friends last week and has been sharing envy-inducing photos of her gang on Instagram since then. The photos and videos shared on Instagram is proof that the trio is having a blast in Hrishikesh. From gorging on to some delectable local cuisines to exploring the picturesque landscapes of the city, the trio are doing it all. In one of the photos shared by Ekta Kapoor on Instagram featuring Anita and Krystle, the trio can be seen twinning in white. "White love," Ekta captioned the photo.

Ekta Kapoor took some time off her busy schedule and set out on this trip with her close friends which she is enjoying every bit. Ekta shared a monochrome photo featuring herself with Anita and Krystle and captioned the photo: "Life is never Black and white! It's mostly 'fifty shades of grey'."

Krystle D'Souza, who has featured in several Ekta Kapoor television show, also updated fans with photos from the short vacation. Take a look at all the photos shared by the actress.

On the work front, Ekta Kapoor recently launched Kasautii Zindagii Kay 2 with Erica Fernandes, Parth Samthaan and Hina Khan in lead roles. She is also busy with the production of several web-series through AltBalaji, a branch of Balaji Telefilms, which focuses on short films and web-series.