Hundred Review: Lara Dutta and Rinku Rajguru hold Hundred together with consistent performances. Rajguru is full of beans, Dutta is steady and sedate. 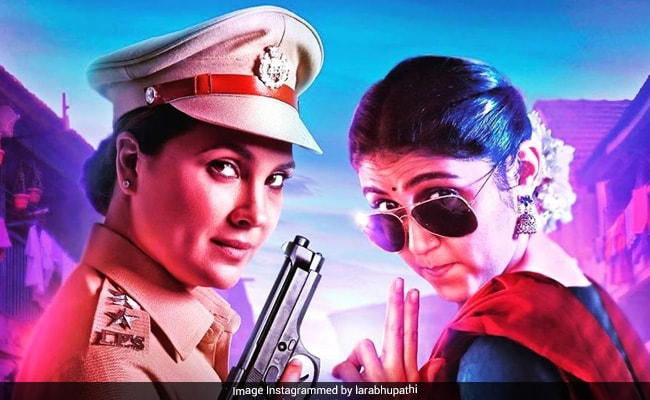 Hundred, a Hotstar Specials offering, is an entertaining but uneven take on two dissimilar women yoked together by the need to fight off the drudgery of their lives. One is a young girl trapped in dreary domestic chores and the dull motions of a government job. Diagnosed with cancer, she is told she will die in a hundred days. She has never lived for herself. The spectre of death liberates her from her inhibitions.

The other, the narrator of the eight-episode tale, is an assistant Commissioner of Police who constantly bangs her head against the glass ceiling and bleeds. She is desperate for glory and recognition as a crime-buster. What she gets to do instead is attend women's day events, provide security outside a Bollywood star's bungalow, turn up at a Ganesh visarjan or participate in a 'safety awareness' flash mob at Victoria Terminus.

Both women have their backs to the wall. The former, Netra Patil (Rinku Rajguru), has nothing to lose. The latter, ACP Saumya Shukla (Lara Dutta), has everything to gain. When their paths cross, the two decide to salvage their individual narratives no matter what it takes. The woman in uniform ropes in the terminally ill girl as a police informer. The move triggers a chain of events that yields both shocks and surprises, besides a slew of new frustrations for the duo.

The struggles of the two women to break free from the shackles of gender expectations constitute the kernel of Hundred. Not all of it adds up. The series has several passages that ramble in an ungainly manner, but the crests and troughs of Saumya and Netra's unlikely partnership do deliver their share of mild drama and dashes of comedy. It vacillates between the intense and the amusing with mixed results.

At the conceptual level, Hundred, created by Ruchi Narain, Ashutosh Shah, Taher Shabbir and Abhishek Dubey, is nothing if not unique despite its familiar emphasis on women trying to ward off myopic, self-serving men who seek to control their fates in the family and at the workplace. A senior colleague likens Netra, a quintessential ingenue, to curry leaves, which add flavour to vada, poha and sambar but are of little use by themselves. The analogy rings a bell in the girl's mind.

Mortality and mirth overlap in Netra's story as she chases unfulfilled desires. At the very top of her bucket list is a trip to Switzerland, which she hopes to undertake with her feckless boyfriend Aniket Naik (Suyash Zunjurke). She is also desperate to lose her virginity and party hard before her time is up. Her father, grandfather and kid brother leech off her. She gets them out of bed every day, cooks for them and washes their clothes before leaving for work. But as soon as the realization that her days her numbered sinks in, Netra leaves it all behind and sets out to live it up with a bit of help from the seasoned Saumya.

Netra is in love all right but given the limited time she has at her disposal it is lust that she looking for. Her boyfriend, whose harebrained business plans never succeed, unceremoniously spurns her sex-before-marriage proposal. The girl casts her net wider, inviting more complications than solutions in the bargain.

While Netra's tale blends the droll with the defiant, Saumya's arc is informed with twists that are way beyond her control until she decides that she must stop playing the game by rules not of her making. The lady cop has to deal with two senior officers, both Deputy Commissioners of Police. One is her immediate boss, Anshuman Goswami (Parmeet Sethi). The other is Parvin Tambe (Sudhanshu Pandey), her husband and the head of the anti-narcotics wing of the Mumbai police. Neither of the two men, riddled with insecurities, is inclined to make things easy for Saumya as she labours to shrug off the label of "the department's item girl".

But there is another side to her that is revealed early on in the series so as not to leave the audience in any doubt about what the lady is capable of. Saumya has a young lover, DJ and aspiring rapper Manmohan 'Maddy' Dahiya (Karan Wahi), who she has hidden away in her Lokhandwala apartment. The guy serves a dual purpose - he is her toy boy as well as a police informer. Her relationship with her husband - the couple have been married for a decade and there is hardly any passion lost between them - is defined by her refusal to start a family.

Saumya does not give two hoots to her mom-in-law's jibe that she has no purpose in life. "Judge kar lo mujhe, ghanta fark nahi padta (Judge me, I don't care)," she asserts in a wider context. That sums up her life's philosophy. But in the workplace, she keeps pushing her luck without much success. Every raid that she leads boomerangs on her and leaves her vulnerable to manipulation by her boss. Virtually every one of the later episodes of Hundred end at a point where a sword hangs over Saumya.

As an audience member, it is easy to empathise with Saumya's plight as the tables are repeatedly turned on her and opportunities that should be hers by right are snatched away from her. But her recurrent troubles also tend at times to get somewhat enervating and monotonous. You will her on to put her snarky boss in his place, but the coup de grace never materializes. Is this a suggestion that victory is beyond her in this 'unequal' battle?

Consider the challenges that Saumya has to face in the line of duty (often with Netra by her side, but with little backing from her superiors in the force): organ trade racketeers, drug dealers, illegal cricket bookies, human traffickers and a visiting Venezuelan minister who schmoozes with a history-sheeter, and a corrupt politician involved in hawala transactions. Her interventions, never half-hearted, pan out more often than not in ways that only add to her woes.

Lara Dutta and Rinku Rajguru, both making their debut in the web space, hold Hundred together with consistent performances. Rajguru is full of beans; Dutta is steady and sedate. They complement each other to perfection. The supporting actors - Karan Wahi, Sudhanshu Pandey, Parmeet Sethi, Rajeev Siddharth (as a bookie) and Makarand Deshpande (playing an avuncular satta operator) - lend their weight to the show.

This isn't a perfect ten. Certainly not ten times over. Hundred skirts around the complexities inherent in its two principal strands - a policewoman grappling with misogyny and a young girl coming to terms with her fate - and presents the story in simple, direct terms, which is either a strength or a drawback, depending upon what you are looking for as a viewer.

Hundred does not always add up, but lead actors Lara Dutta and Rinku Rajguru offset some of the show's inconsistencies. The series meanders somewhat at times, but the highs and lows of the adventures of two women fighting adversity yields enough drama and humour to keep things on the boil.