Aishwarya Rajesh dropped a bunch of pictures on Instagram 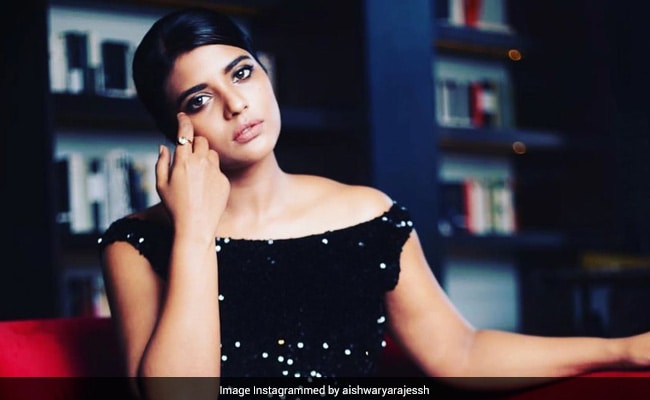 Actress Aishwarya Rajesh is one of the most loved South celebrities. The 31-year-old actress, on Thursday, treated her fans to a bunch of throwback pictures of herself. The pictures are from a photoshoot that took place "well before the lockdown." In the pictures, Aishwarya Rajesh can be seen dressed in a black and white gown. She can be seen sitting on a red couch as she poses for the pictures. The pictures are so stunning that not just fans but the actress herself seems to be smitten. Aishwarya poured her love for the pictures and the photoshoot in the caption of the post. "Here are some lovely, aesthetically shot pics!! These were shot well before the lockdown! Loved doing this shoot," she wrote in the caption of the post. The new pictures have already sent the Internet into a tizzy.

Many fans of the actress commented on her post and complimented her look in the pictures. "Super aishu," a fan commented and added many heart emojis along with the comment. Most other fans dropped heart and fire emojis in the comments section of the post.

Earlier this week, the actress gave us a glimpse of her "boxing practice." She shared a video from her training session with her coach on Instagram. "2 weeks of my boxing practice ... Thank u to my coach," Aishwarya Rajesh wrote in the caption of the post.

Aishwarya Rajesh is a popular face of the South film industry. She has worked in films like Kanaa, Ka Pae Ranasingham, Jomonte Suvisheshangal and Namma Veettu Pillai. She has also appeared in Bollywood film Daddy, co-starring Arjun Rampal. Daddy released in 2017.

This Is How Sanjana Sanghi Jazzes Up Her Workout Sessions