Godzilla Vs Kong Review: Nary A Dull Moment When The Monsters Are On Screen

Godzilla Vs Kong Review: The film, with its frequent, and inevitable, nods to decades of pop culture history that spans the globe, is a potboiler that unabashedly revels in excess. 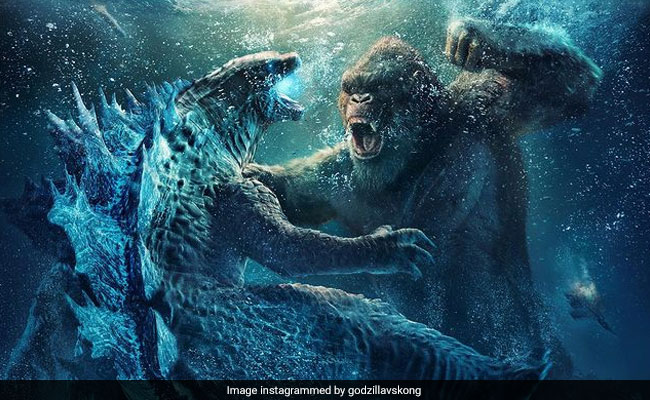 Godzilla Vs Kong Review: A promotional poster of the film. (courtesy: godzillavskong )

A passably engaging and rather uncluttered plot provides the surround sound for epic monster brawls in Godzilla Vs Kong, the fourth entry in Legendary Pictures' MonsterVerse. Apart from being the biggest of the lot, it is also what the franchise was leading up to since 2014's Godzilla. This is a movie that delivers the world - and then some - to its fanbase.

Godzilla Vs Kong, with its frequent, and inevitable, nods to decades of pop culture history that spans the globe, is a potboiler that unabashedly revels in excess. It is none the worse for it because that is the nature of the creature. To be precise, two creatures. When the Alpha Titans, driven by rage, go head-to-head in no-holds-barred fights, it is no ordinary spectacle. It towers over aircraft carriers, giant waves of the ocean and skyscrapers of a megacity.

The screenplay by Eric Pearson (whose writing credits include various Marvel projects) and Max Borenstein (who has been involved with all the modern Godzilla/Kong films) pulls out the stops and creates the stage for the two monsters to face off against each other in the sea and in the middle of Hong Kong, leaving a trail of destruction in their wake.

This is by far the most ambitious movie of the career of director Adam Wingard, who hitherto helmed slasher/horror thrillers. He steps up to the plate and gives Godzilla vs Kong all that he has got. What he has got is more than enough to ensure that the payoffs from the grand showdowns between a fire-spewing gargantuan lizard and a mighty ape who raises hell when provoked does not ever fall short.

The paths of the two monsters cross not because they are spoiling for a fight. The machinations of mankind precipitate the confrontation. Two groups of scientists - one determined to protect Kong, the other bent upon taming Godzilla - are in the fray.

The former is made up of discredited Monarch geologist Nathan Lind (Alexander Skarsgard), Titan 'whisperer' Ilene Andrews (Rebecca Hall) and Iwi orphan Jia (played by hearing-impaired newcomer Kaylee Hottle), all three new additions to the franchise. Dr. Andrews is the adoptive mother of the little girl who is the only one on the severely depleted Skull Island who can communicate with Kong.

The other bunch of scientists is led by the Walter Simmons (Damien Bichir), CEO of Apex Cybernetics, whose sprawling facility in Pensacola Florida is attacked early in the film by Godzilla. Working with tech engineer Ren Serizawa (Shun Oguri in his first Hollywood role), he is out to make the world a safer place by rustling up a match for the monsters.

There is, of course, Mechagodzilla (a robotic version of the unstoppable sea monster) lurking somewhere in the background but its advent assumes importance only after Dr. Lind, along with Dr. Andrews, Jia and disruptive Maia Simmons (Eiza Gonzalez), Walter's daughter, have followed King Kong on a dangerous mission to Hollow Earth in search of a sepulchral source of energy that could fight Godzilla.

The human characters have a significant amount of work to do in Godzilla Vs Kong, but the eponymous monsters are never in danger of being upstaged. The two are on the screen for at least half of the film's nearly two-hour running time. When they are, there is nary a dull moment.

Godzilla is on a rampage. The creature has a reason. And that is what the nosey Bernie, the spunky Madison and the feckless Josh are out to ascertain at great peril to themselves. Kong, in contrast, is more of a reluctant fighter who is drawn into battle largely by events masterminded by the humans. The prospect of finding home and family entices the ape into leading the way into an unknown ecosystem.

A great deal of the goings-on, given the spry way the storyline is treated, frequently requires verbal explication but the racy rhythm of the dialogues obviates the risk of the narration sinking into inertia. Godzilla vs Kong, despite being centred on a pair of giants who swamp the screen completely as they have a go at each other, manages to squeeze in plot details and human elements that go beyond what the film has on offer by way of its undeniably dazzling visual effects and technical finesse.

There is talk of reverse gravity propulsion, Hollow Earth Aerial Vehicles (HEAVs), shipping pods, "humanity's bold new era" and even an underground colony for the elite to retreat to if governments and mega corporations were to accidentally hit the Doomsday button. You have to keep your ears perked - your eyes already are - to catch all the terms that are tossed around as the ground is paved for an epic confrontation that cannot be prevented.

Godzilla vs Kong operates at a basic, visceral level. That isn't a bad thing at all given that the two combatants need the sustained power of the visuals and the kinesis of the set pieces to keep interest alive in what fate has in store for the two - and for mankind. The scale of the action is consistently impressive. The buoyancy of the tale does not flag either even when the dialogues get a tad verbose.

The emotional pull of the film may be feeble at times but what unfolds on the screen is envisioned, mounted and packaged with panache. Yes, two relationships - both involving the silent Jia - could have done with a little more exposition. The girl has been adopted by both Dr. Andrews and Kong. Her bond with the latter in particular propels the plot forward in significant ways. A girl whose parents perished in a storm that wiped out a community and a creature in containment whose habitat is no longer big enough to hold him have much in common, which explains the deep rapport between them.

If only Godzilla Vs Kong had the bandwidth for a more extensive exploration of the Jia-Kong communion, it would have been a significantly different movie. But then, would it have been so much unalloyed fun?