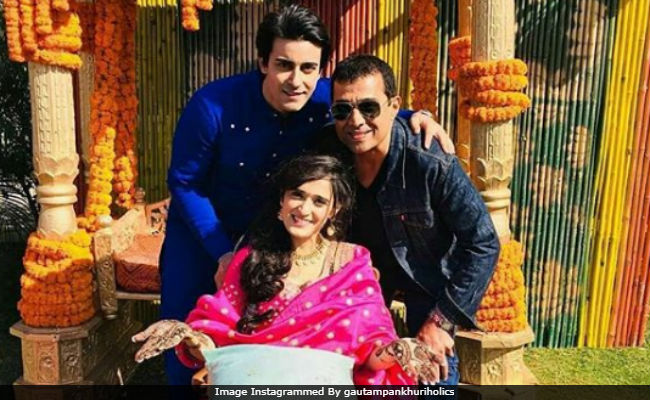 New Delhi: Television actor Gautam Rode is getting married to fiancee Pankhuri Awasthy, Bollywoodlife reports. Pictures of the couple, from what appears to be their mehendi ceremony, have been shared widely across social media. However, neither Gautam nor Pankhuri have confirmed about their wedding. The pictures shared by a couple's fan club on Instagram features Pankhuri in a beautiful bright pink lehenga and Gautam, wearing a navy blue kurta, stands beside her, along with a friend. Bollywoodlife reports that Gautam and Pankhuri are getting married in Alwar (Rajasthan) today. The festivities include a roka and a small ring-exchanging ceremony. Only family members and close friends are invited.

Here are the pictures that have been shared. (Swipe right to see more).

Gautam Rode is best-known for his role in the TV show Saraswatichandra. Gautam and Pankhuri first met on the sets of their mythological show Suryaputra Karn. Later, Pankhuri featured as the lead actress in Kya Qusoor Hai Amala Ka? and Razia Sultan.

Their engagement ceremony was held during Diwali and was also a closed-knit affair. "They had a small roka ceremony attended by their families. Both Gautam and Pankhuri are introverts and they have always remained guarded about their personal lives. They have been together for almost two years now and decided to get engaged during Diwali, making it even more special for their loved ones," a source told Bombay Times.

After their engagement reports went viral, Gautam shared a picture with Pankhuri and wrote, "Start of a new journey. Thank you friends for all your lovely wishes."

Start of a new journey .. Thanku friends for all ur lovely wishes