Eternals Trailer: So, Where Were You During The Thanos Finger Snap? The Eternals Were...

Eternals are super-powerful and immortal beings who have been secretly living on Earth, masquerading as ordinary humans, for the past 7000 years 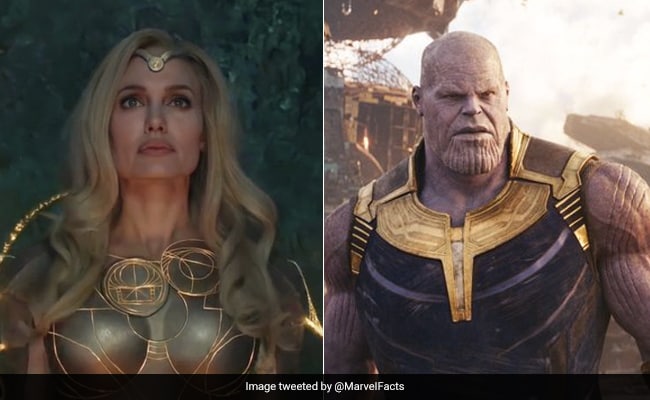 Thanos is the cousin of Thena (played by Angelian Jolie). (Image courtesy: MarveIFacts )

"Throughout the years, we have never interfered - until now," intones an Eternal superhero in the new trailer for upcoming Marvel film Eternals, leading to a social media meme-fest on why the team of superpowered beings who have lived secretly on Earth for thousands of years did not show up to give the Avengers a helping hand as they took on Thanos. The Eternals - Thena, Ajak, Gilgamesh, Ikaris, Phastos, Sprite, Kingo, Sersi, Makkari and Druig - have helped mankind in technological and other ways and presumably stood by their non-interference policy through famines, epidemics, genocides and two world wars; why should they have engaged with Thanos - himself a lapsed Eternal - as he snapped away half of all life in the universe? "Until now" seems to refer to the Avengers disassembling - Iron Man and Captain America are both gone albeit in different ways.

Towards the end, Sprite (Lia McHugh) asks the gathered Eternals: "Now that Captain Rogers and Iron Man are both gone, who do you think's gonna lead the Avengers?" making it clear that the meeting was held post the events of Avengers: Endgame, in which Captain America (played by Chris Evans) assembled almost all of Earth's superheroes to stop Thanos. Iron Man (Robert Downey Jr.) sacrificed himself to save the universe in the fight against Thanos in Endgame.

However, the Eternals' inaction against Thanos didn't go down well on Twitter which, sensing an opportunity, filled the gap with memes and more.

Here's how Twitter reacted to the Eternals turning a blind eye to the fight against one of their own in Infinity War and Endgame:

The Eternals while Loki invaded earth, Ultron threatened to wipe out the human race and when Thanos snapped away half of the life on the planet #TheEternalspic.twitter.com/hI6DcEvvDm

*Thanos killing everyone, Iron Man sacrificing himself.
The #Eternals: pic.twitter.com/CbmFhdCWGj

The Eternals watching the Avengers fight Loki, Ultron, each other, and then Thanos. #Eternalspic.twitter.com/oUwm8DhHDb

The #Eternals watching Thanos whipe half the universe: pic.twitter.com/ndyVgP6fSQ

Thanos murders half the avengers

One of the users also asked what most of us are thinking after watching the trailer - "when Thanos snapped... were none of the Eternals affected?"

Soooooo quick question... when Thanos snapped.. were none of the Eternals affected??? #Marvel#Eternals

Remember when we said that most of the Eternals are related to Thanos? Thanos, the son of Eternals A'Lars and Sui-San is a distant cousin of Thena, Ikaris, Sersi, Ajax, Sprite and Druig, as per the Eternals comics. Referring to Thanos and Eternals' blood relation, a Twitter user wrote: "Maybe that's what they didn't want to help when Thanos came to earth, some family issues."

maybe that's what they didn't want to help when Thanos came to earth some family issues #eternalshttps://t.co/AkfmzuUB62

How Marvel explains this plot hole will be interesting to watch; meantime, someone on Twitter offered a possible solution:

Dear all the people getting mad at the #Eternals for not helping the #Avengers defeat Thanos. In the trailer most of what they showed are flashbacks. In the present day the Eternals don't remember they're gods. They get awakened in this movie when a Deviant threatens Earth. pic.twitter.com/lBvNz4Dw25

The film is slated to release in October this year.

Will Eternals Be The Game Of Thrones Stark Reunion Nobody Asked For But Everybody Wants?