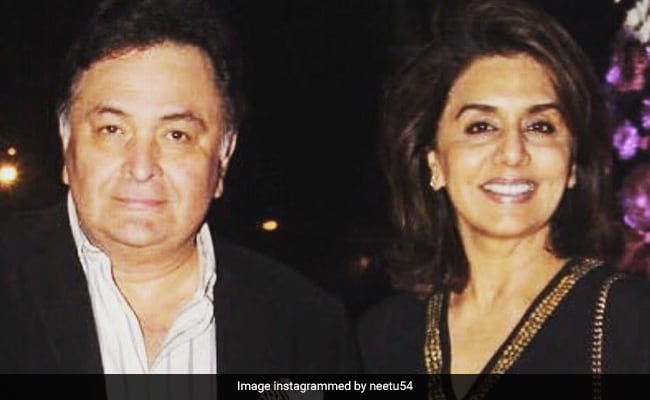 Neetu Kapoor has a special Eid Mubarak wish coming all the way from her heart where who else but her late husband, actor Rishi Kapoor resides. On the occasion, the yesteryear actress remembered him by sharing a still of the iconic song Parda Hai Parda from the movie Amar Akbar Anthony, which featured the star couple. In the film, Rishi Kapoor portrayed the role of Akbar Ilhabadi whereas Neetu Kapoor played Dr Salma Ali, his love interest. A text on the image read, “Eid ul Adha Mubarak.” In the caption, she wrote, “Eid Mubarak! Chaand Mubarak! love and hugs (Eid ul Fitr).” Her daughter Riddhima Kapoor Sahni dropped three heart emojis under the post. Actress Soha Ali Khan wrote, “Eid Mubarak.” But fans were quick to point out to her that the image contained the wrong message as it was “Eid ul Fitr” and not “Eid ul Adha.” An Instagram user wrote, “Ma'am, thank you for the wishes but this is Eid-ul-Fitr.” Another corrected the actress by saying, “It's not Eid ul Adha. Thanks anyway.” One more user echoed the sentiments of many of her Instagram followers by dropping a comment, “It's Eid ul Fitr Ma'am. A little correction but still Eid Mubarak.”

Many other film stars celebrated the festivities virtually by extending Eid wishes. Actress Sonam Kapoor shared a snippet of the song Yoon Shabnami from her debut film Saawariya. It also features Ranbir Kapoor. Sonam added in the description note, “Eid Mubarak to my sisters and brothers.”

Shahid Kapoor simply shared a sun-kissed selfie to wish his fans. He wore a black hoodie outfit. In the caption, the actor wrote, “Eid Mubarak.”

Actress Raveena Tandon shared her snap clad in a green traditional outfit on Instagram. The caption read, “Prayers and wishes to all celebrating Eid all over the world. Peace and forgiveness.”

Eid Mubarak to all.