Dial 100 Review: Manoj Bajpayee is ably supported by Neena Gupta and Sakshi Tanwar, who play two distressed mothers whose paths cross in circumstances that lead to the ill-fated encounter at the heart of the film. 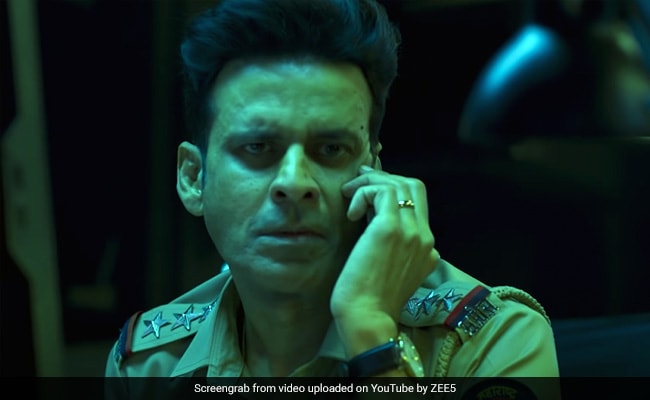 Dial 100 Review: Manoj Bajpayee in a still from the movie (courtesy YouTube)

Written and directed by Rensil D'Silva, Dial 100 is an intense slow-burner that revolves around a police officer who must pull out the stops to save his family. This is conventional territory for suspense writers who seek to explore the lengths to which a man will go to protect those he loves the most.

The only departure from norm here is that the film involves two sets of parents who go head-to-head in a cat-and-mouse game. One of the couples has a score to settle. They are in it with intent. The other is dragged into the dangerously messy confrontation. The latter has no option but to play along.

Actually, if one stretches the point a bit, Dial 100 has a third set of parents whose role in the story is largely peripheral but whose impact on what transpires between the other two couples is anything but minimal. In all the three cases, a teenage son - one an unfortunate victim, the second a pampered and privileged drifter, and the third an inadvertent facilitator - is involved.

As the face-off unfolds, Dial 100, viewed in the context of the genre, springs a surprise or two. While seeking to deliver its complement of twists and thrills, it addresses the themes of bereavement and grief and binds them to a slew of other issues - parenting, delinquency, crime, money power and police corruption.

Not that Dial 100 is a stodgy exercise as a result, but the film does struggle to sustain the emotional force that stems from the core of the narrative. It does not spark enough tension and intrigue to be deemed an edge-of-the-seat, a-thrill-a-minute affair.

Once the principal jigsaw pieces have been placed on the table, it becomes easy to anticipate the plot turns that the film devises as a means to muddying the waters for the couple pushed to the wall. The action takes place in the course of a rainy night that does not turn out to be just another desultory day at the office for Senior Inspector Nikhil Sood (Manoj Bajpayee), whose wife frets over his perpetual absence from home.

Dial 100 hinges on a distraught mother seeking justice but the focus of the camera is squarely on Manoj Bajpayee's face, voice and body language. The lead actor is in impeccable form. He lends the film an edge that serves to a great extent to offset the drawbacks of the screenplay.

Much of the early part of Dial 100 plays out in the form of phone conversations between Nikhil, who heads the Mumbai Police emergency control room, and a mysterious woman who has made a distress call to reveal to the cop - she asks for him by name to the latter's bafflement - that she has made up her mind to end her life. 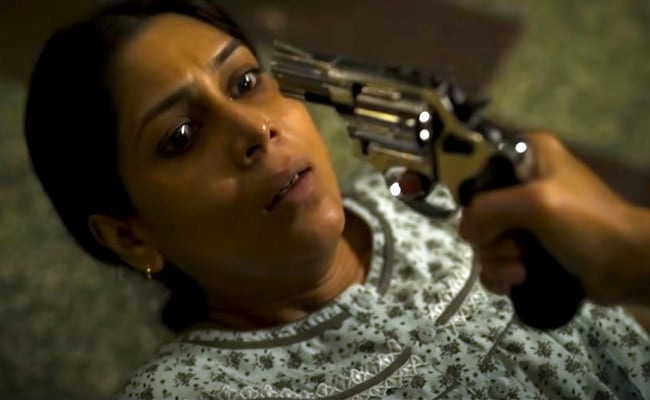 Dial 100: Sakshi Tanwar in a still from the film (Courtesy: YouTube)

Turns out that it isn't a saviour that she is looking for. She has an ulterior plan up her sleeve. The policeman soon finds himself in a major spot of bother. There is something in his past that the desperate caller wants him to atone for. What could it be? Thereby hangs a tale.

The woman's cold, calculated voice begins to give Nikhil the shivers. She seems to know too much. He now has to swing into action to save the people he holds dear but his moves have to be cloaked in complete secrecy. He is compelled to keep his colleagues in the dark as a he hatches a counter-plan.

The woman at the other end of the line, Seema Pallav (Neena Gupta, who is heard for a long time before she is seen) takes the upper hand. There is so much at stake that the senior inspector has to tread with extreme care. His wife Prerna (Sakshi Tanwar) is in danger. So is his son Dhruv (Svar Kamble). The odds are stacked heavily against the family. The onus is on the cornered policeman to pull off an improbable rescue act.

The emphasis of Dial 100 isn't so much on the physical action that ensues as on the mind games that Seema plays with Nikhil. So, there aren't too many explosive moments in the film. The atmospherics contribute their bit to creating the ambience that the showdown needs. 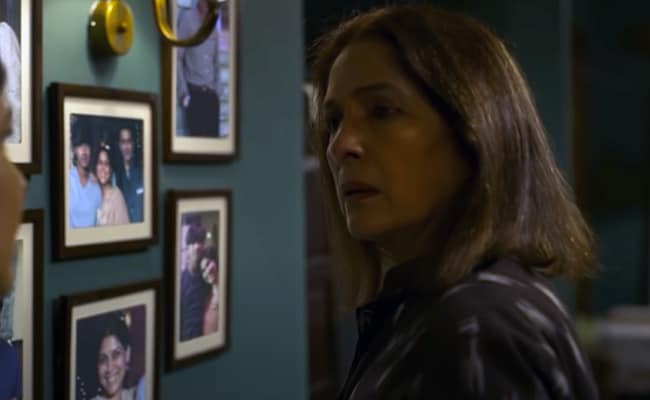 Dial 100: Neena Gupta in a still from the film (Courtesy: YouTube)

The drama opens in the police control room around midnight and ends a few hours later in the parking lot of a nightclub, the site of a drug deal that is central to the plot. The conflict between Seema Pallav and Nikhil Sood inevitably takes a toll on both sides, but the loss of human lives and the attendant bloodshed assume a strangely clinical quality.

Dial 100, produced by Sony Pictures Films India and streaming on Zee5, is visually monotonous but that definitely isn't because cinematographer Anuj Rakesh Dhawan isn't at his best. The opening sequence in which Nikhil drives to work through a monsoon downpour evokes a sense of what is to come.

The interiors of the Emergency Response and Surveillance Control and Command Centre, Nikhil's workplace, are filmed in a way that conveys the drudgery of the surveillance work that the cops do. But when the action shifts beyond the confines of the policeman's workspace, Dial 100, in terms of the compositions, ceases to be as arresting as its initial passages.

The film is, however, crisply edited by Asif Ali Shaikh, which ensures that it has a certain degree of momentum even when it slips into what resembles an auto-pilot mode.

Dial 100 is watchable because of the kind of Manoj Bajpayee acting masterclass that no longer catches us by surprise so accustomed are we to it. He is ably supported by his two key co-actors, Neena Gupta and Sakshi Tanwar, who play two distressed mothers whose paths cross in circumstances that lead to the ill-fated encounter at the heart of the film.

Also in the cast is Nandu Madhav, who makes an impression playing a character relegated to insignificance for the most part. However, in the only scene in which the spotlight shifts ever so slightly towards him, he makes every moment count.

Dial 100 is steady without being spectacular. The moments that work - need we say that they are all propelled principally by Bajpayee's presence - are good enough to make amends for the ones that don't.