Chintu Ka Birthday Review: Solid performances from Vinay Pathak and his two proven co-actors (Tillotama Shome and Seema Pahwa), a tidy screenplay that does well to stay within its limits and a theme that holds a fair bit of water. 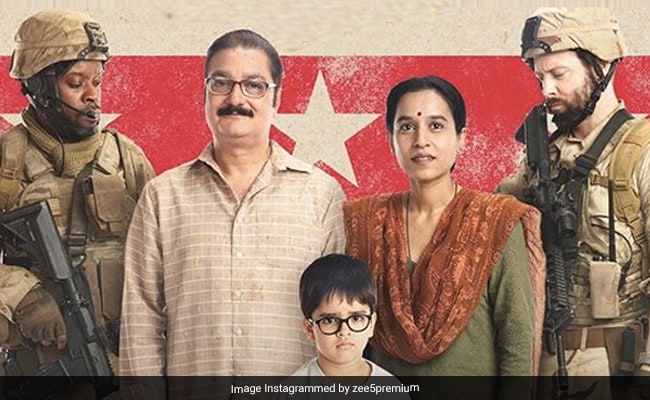 A boy turns six. His parents, sister and grandmother plan a birthday party, all the more because the previous year's treat was scuttled. But will it be child's play this time around? The family of water-filter salesman Madan Tiwari (Vinay Pathak) is stranded in war-torn Baghdad.

The central premise of Chintu Ka Birthday, written and directed by Satyanshu and Devanshu Singh and produced by the men behind All India Bakchod (AIB), is simple enough, but the film makes bold to expand its scope and bring out the deleterious effects of war on a family in the wrong place at the wrong time.

Solid performances from Pathak and his two proven co-actors (Tillotama Shome and Seema Pahwa), a tidy screenplay that does well to stay within its limits and a theme that holds a fair bit of water especially in light of the times we live in, where pestilence and pettiness are aggravated by incompetent, self-serving demagogues who thrive on sowing seeds of division and hatred.

Chintu Ka Birthday, streaming on Zee5, is in way a facile affair, but it has an undeniably feel-good air about it. Setting the story in Iraq is an easy way out. It enables an overly generalised statement on the plight of people trapped in a conflict zone. The makers of the film do not have to step on political toes closer home while making the right noises.

What the film says (the dialogue is in Hindi, English and Arabic) is beyond blame, but the prism through which it articulates its concerns is a touch too expedient. Hence its celebration of human resilience does not ring wholly true. But the film has just enough warmth to be able to paper over the creases.

It is easy when you employ two brawny American soldiers (Reginald L Barnes and Nicholas Scholz) to represent the ugly face of military invasion or introduce a victimised Shia political activist (Khalid Massou) to allude to Saddam Hussein's violent purge of opponents. The US army duo, armed to the teeth, barges into the Tiwari home and proceeds to demonstrate the extent of their power.

Chintu Ka Birthday keeps the focus on the trials and tribulations that the family faces in the course of half a day during which all their plans seem destined to come unstuck. A birthday bash might seem like an innocuous diversion in itself, but when it is organised amid incessant gunfire and bomb explosions it assumes ominous proportions.

Playing out in April 2004, a year after the US-led invasion of Iraq and four months after the capture of Saddam Hussein, Chintu Ka Birthday, a low-budget endeavour, does not possess the sweep and depth of a Life is Beautiful. Not that it even tries.

The action takes place entirely inside a house and the only exterior shots in the film are of a dusty lane that leads to an iron door, which is the entrance to the Tiwari home. A crucial flashback sequence explaining the circumstances in which a man from Bihar ended up in Iraq with a family and that now cannot get out of the country is delivered in the form of an animated passage that envelopes an otherwise forbidding tale in momentary light-heartedness.

According to the government in New Delhi, the last of the Indians have been evacuated from Iraq. This particular family has been forgotten and left to fend for themselves. The construct is simplistic, but the fate of the Tiwaris does arouse empathy because of the universal nature of their struggle.

As war rages around them (all off-camera of course), they must keep their head above water and hold on to the belief that their misery will come to an end one day. Theirs is a story of all victims of conflict, military or otherwise, caught in a limbo and paying the price for a world overrun by militarism.

Madan, who left home many years ago to set up shop in Iraq, is no Guido Orefice. But he is a father all right. He will do whatever it takes not to let anything get in the way of his son's little joys. His wife Sudha (Shome) and mother-in-law Sarla Devi (Pahwa) are his willing accomplices, as is his daughter Lakshmi (Bisha Chaturvedi).

The boy, too young to understand what is going on (Vedant Raj Chibber is perfectly cast as the bespectacled, beatific Chintu) is oblivious to the threats swirling around him. He is happy and secure in the knowledge that all is in readiness for an all-out celebration.

Nostalgia for the homeland is a thread that runs through Chintu Ka Birthday and takes the form of a fervent yearning. The ringtone on Madan's mobile phone is an instrumental version of Sare jahaan se achcha Hindustan hamara. His daughter is old enough to sense the desperation of her parents. Her mother and grandmother can only pine for what they have lost and desire to regain.

They sing a folk song sans musical accompaniment (Shome and Pahwa lend their voices to it), which serves as a measure of the burden of their loss. What the two women croon translates to "o little koel, my dear bird, please drop a couple of berries". But in this war-ravaged land, hounded by death and destruction, there are neither songbirds nor luscious berries.

A birthday party in danger of being botched is a passable metaphor for a country under siege. For all its expedient trappings, it is definitely worth celebrating thanks to the boost it receives from the able writing, fine acting and all-round technical finesse.