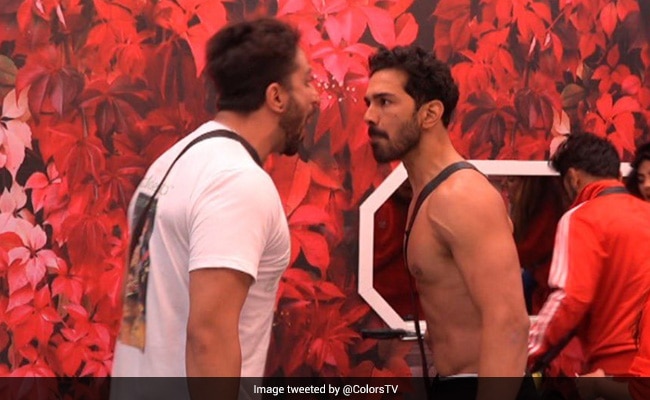 Bigg Boss 14: Aly and Abhinav in a still from the show. (courtesy ColorsTV)

Tonight's episode of Bigg Boss 14  was an intense one. The episode began with the pending weekly task, as a part of which, the winning team would be allowed to use the restricted areas of the house. Vikas Gupta was the moderator of the task, while the other housemates were divided into two teams - the red team comprised Rubina Dilaik, Abhinav Shukla, Arshi Khan and Nikki Tamboli. The yellow team members included Aly Goni, Rahul Vaidya, Devoleena Bhattacharjee and Rakhi Sawant. Vikas Gupta, who had to declare the name of the winning team, couldn't take a decision, which is why the contestants of both the teams will not be allowed to use the bedroom, two of the washrooms and the spa area.

During a part of the task, Aly Goni was seen trying to snatch a cycle from Abhinav. He then threw it in the pool. Abhinav got furious. After Aly Goni abused Abhinav Shukla, the two got into a heated argument and Abhinav pushed Aly. Meanwhile, when Aly tried to snatch the cycle from Rubina's team, she said, "Make your own cycles, don't destroy ours." The contestants who are nominated for this week are Vikas Gupta, Nikki Tamboli, Devoleena Bhattacharjee and Rahul Vaidya.

In another segment of the show, Vikas Gupta and Devoleena Bhattacharjee got into a war of words. When Nikki left her food plate on the kitchen's slab, Vikas asked her to wash it. Nikki got angry and asked him not to order her. Devoleena said that Nikki Tamboli only knows to play the "woman card here." Nikki giggled and said, "Look who is talking." Arshi Khan was seen changing her side and was seen rooting for Rubina Dilaik and Abhinav Shukla.