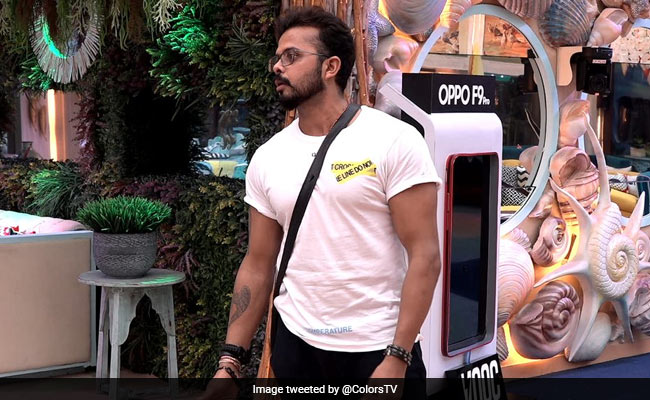 S Sreesanth in a still from Bigg Boss 12 (Courtesy BiggBoss)

Bigg Boss 12 has kicked off with a blockbuster premiere headlined by Salman Khan on Sunday evening. The second day was replete with the usual flavours that run through controversial reality TV show. We witnessed a totally new facet of cricketer S Sreesanth on the second episode. Sreesanth, who seemed to be calm and composed on the first day, showed some aggression and even threatened to walk out of the house but more on that later. The first task, which is called 'BB Press Conference,' which pitches singles against couples, continued today with Bigg Boss 11 winner Shilpa Shinde and TV actor Karan Patel as the moderators. Dipika Kakar challenged Somi and Saba Khan for the BB press conference task. She alleged that Saba and Somi are impulsive and impatient. Several other contestants also supported her allegations. Bigg Boss declared Dipika as the winner against Somi and Saba after rounds of debate and discussion.

After the gong goes off for the third time, Sreesanth challenges Sourabh Patel and Shivashish Mishra for the 'BB Press Conference'. But during the session, Sreesanth couldn't say anything to justify why he is a stronger contestant than Sourabh and Shivashish's Jodi. Soon after this, Bigg Boss calls off the first task of the season.

Things take an ugly turn when Sreesanth passes a remark on Somi and Saba's upbringing. Following the remark, Somi breaks down into tears. Though Sreesanth apologises for his mistake, the Khan sisters get into an argument with him. Enraged and fed up of the arguments, Sreesanth takes off his mic.

Will Sreesanth leave the Bigg Boss or resolve his differences with Somi and Saba? Your questions will be answered tomorrow in a brand new episode of Bigg Boss season 12.