Bigg Boss 11 December 10: Shilpa Shinde and Aarshi Khan will arrive on the sultani akhada as part of a fun task and battle it out 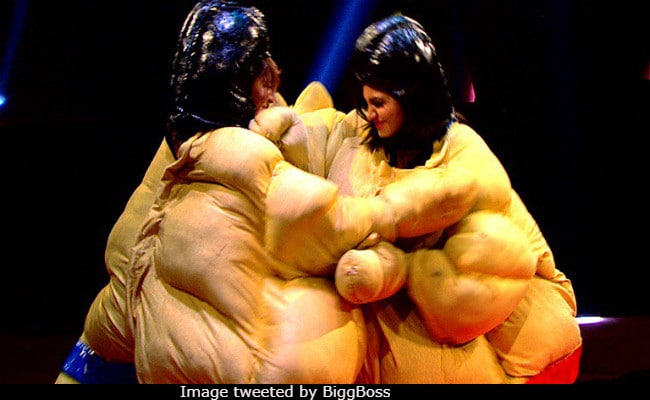 Bigg Boss 11 December 10: A still from the show (courtesy XYZ)

New Delhi: Monday's episode of Bigg Boss 11 will be a rather interesting one with a wrestling match between fellow contestants Shilpa Shinde and Aarshi Khan. The two contestants will arrive on the sultani akhada as part of a fun task and battle it out, as instructed by Salman Khan. It's the weekend, which means time for Salman Khan's honest reviews and brutal comments. The celebrity host will particularly grill Aarshi Khan for her changed behaviour after she was appointed as the captain of the house. Aarshi will strongly be rebuked for her constant misbehaviour with Shilpa. In the previous week, the contestants were paid surprise visits by their parents and relatives in the house, after which Aarshi Khan accused Shilpa of misbehaviour.

However, Salman Khan sets the record straight saying Shilpa cannot be pulled up for misbehaviour because she was not the least indecent when Aarshi's father visited the house. Salman adds that Aarshi's whims and allegations are based on her imaginations. Aarshi also faces Salman Khan's wrath for what all she said after Shilpa Shinde's mother had paid a visit to the house.

Promoted
Listen to the latest songs, only on JioSaavn.com
The team of Fukrey Returns will also drop by the Bigg Boss 11 house tonight and they will have grill the contestants to the fullest. Watch Richa Chadha, Pulkit Samrat, Manjit Singh and Varun Sharma, will all have a gala time on the show tonight.

'Fukrey Returns' team visits the #BB11 house. Watch them have fun with the housemates tonight at 9 PM on #WeekendKaVaar. pic.twitter.com/WP1dIkTtPY

Watch this space for more updates about Bigg Boss 11.