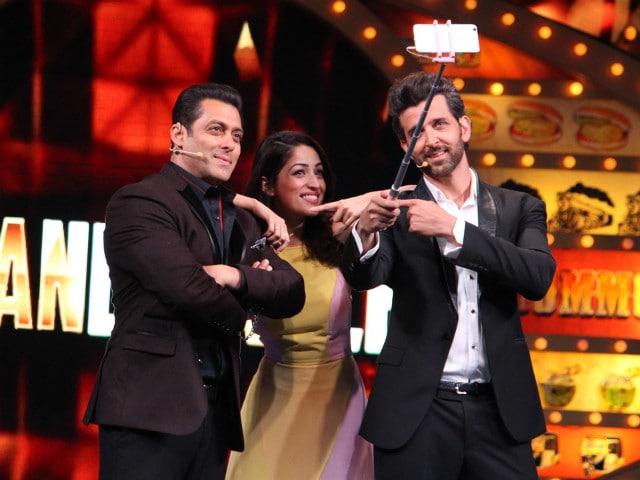 Bigg Boss 10 Grand Finale, January 29: A still from the show

New Delhi: Bigg Boss 10 is just hours away from the grand finale, to be aired on television tonight 9pm onwards. Salman Khan will return to host the grand finale of Bigg Boss 10, and he will have a lot of fun on tonight's episode. Salman will be joined by a bevy of stars, both from Bollywood and TV. Actors Hrithik Roshan and Yami Gautam will bring their new film Kaabil to the sets of the show. The trio will celebrate the success of Kaabil with the finalists. Currently, Bigg Boss 10 has VJ Bani and Lopamudra Raut from Team Celebs and Manveer Gurjar and Manu Punjabi from Indiawale as the finalists on the show. However, Manu Punjabi have allegedly quit the show ahead of its finale after accepting the sum of Rs 10 lakhs, reported bollywoodlife.com

Salman Khan's blockbuster performances will be tuned to his hit songs like Mera Hi Jalwa and Aaj Ki Party.

The ex-housemates join @beingsalmankhan on the stage to put on a super-entertaining act on #BB10GrandFinale! pic.twitter.com/tqPa76xOWE

Lopamudra and Bani, who made headlines for their constant war or words on the show, will deliver rocking performances to songs from Aamir Khan's Dangal, after all, they are the 'Dhaakad girls.'

The 'Dhaakad' girls @lopa9999 & @Bani_j dance their way to #BB10GrandFinale by putting up a great performance! pic.twitter.com/j0WTuFgYef

Giving the girls company will be Manu Punjabi and Manveer Gurjar, who are all set to make a stylish entry on bikes and for a power packed performance to Toh Dhishoom.

Like every year, the grand finale of Bigg Boss 10 will be attended by the ex-contestants. Salman ropes in Monalisa, Rohan Mehra, Nitibha Kaul and Gaurav Chopra for an interactive session.

.@beingsalmankhan interacts with the ex-housemates on #BB10GrandFinale! Tune in tonight to see what they have to say about our finalists! pic.twitter.com/sk4oJ0OZO3

Promoted
Listen to the latest songs, only on JioSaavn.com
The grand finale of Bigg Boss 10, will also have Sohail Khana and Neha Dhupia arriving with their little guests. Sohail and Neha are the judges of children's reality show Chhote Miyan.

Don't miss this fun interaction as the cute kids from #ChhoteMiyan the judges of the show @NehaDhupia & @SohailKhan! #BB10GrandFinalepic.twitter.com/l0gjuiD0lD

Meanwhile, the Bigg Boss finalists - Manu, Manveer, Bania and Lopa were part of a panel discussion on Saturday's episode, in which they debated over who should win the tenth season of the show. The finalists were also part of a makeover session in yesterday's episode. Bigg Boss 10 kicked off its journey with the first episode being aired on television on October 16 last year.