Another Round Movie Review: Mads Mikkelsen's Film Is An Intoxicating Brew

Another Round Movie Review: Mikkelsen's principal co-actors - Thomas Bo Larsen, Magnus Millang and Lars Ranthe - are just as steady when they act drunk and out of control in the film's most crucial scenes. 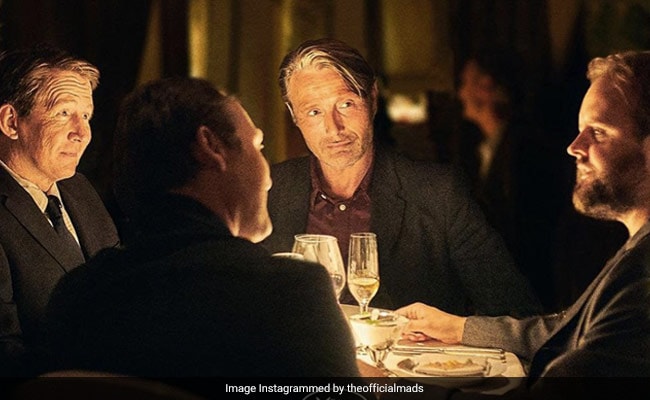 Mads Mikkelsen in a still from the film (courtesy theofficialmads)

(Beginning a series of reviews of the frontrunners for the Best International Film Oscar. Fifteen films have made it to the next round of voting that will take place between March 5 and 10. The Oscar nominations are due to be announced on March 15 and the ceremony is scheduled for April 25.)

Of the 15 titles on the Best International Film category shortlist for the upcoming 93rd Academy Awards, none is in with as good a chance of going all the way as Denmark's Another Round. Director Thomas Vinterberg teams up with Mads Mikkelsen (Cannes 2012 Best Actor for The Hunt and Bond antagonist in Casino Royale) to deliver an intoxicating, well-balanced brew that leaves the audience with a life-affirming hangover.

Another Round (Danish title: Druk, which roughly translates to 'Binge Drinking') celebrates positivity even as it probes the culture of drinking in Denmark through four men grappling with a mid-life crisis aggravated by the desperate means they adopt in the hope of tiding over the twin challenges of professional stagnation and emotional confusion.

Vinterberg is on tricky ground here - he has grown-up men frequently acting like errant schoolboys - but that is par for the course for the director of films such as The Hunt and The Commune. He employs a thorny premise, moral ambivalence and a bit of Soren Kierkegaard to deliver an expertly modulated tragicomedy that is more about being acutely aware than being in an alcohol-induced daze.

Accessible philosophy and a scientific theory that may not have any basis are pressed into the service of a story of friendship and the fear of social and professional failure that drives four jaded high school teachers to experiment with daytime drinking and test out Norwegian philosopher- psychiatrist Finn Skarderud's hypothesis that humans are born with a blood alcohol content that is 0.05% too low and, therefore, need to drink one or two glasses of wine regularly to keep the level right.

The bizarre proposition pops up in the course of a boozy dinner that one of the four men hosts to celebrate his 40th birthday. Improbable as they theory may sound to the rest of us the sloshed quartet decides to give it a shot. One of them convinces the other three that the right BAC will make them all "more relaxed and poised and musical and open".

Vinterberg peppers the film with music in the background to reflect the protagonists' bid to liberate themselves from their inadequacies and inhibitions. It culminates in a rousing finale (with Mikkelsen in top form, this has got to rank among the greatest closing scenes of all times) accompanied by the Scarlet Pleasure number "What a Life'.

The focus of Another Round, scripted by Vinterberg with frequent collaborator Tobias Lindholm is on Martin (Mikkelsen), a history teacher on a downward spiral both at home and in the workplace. His students and their parents are unhappy with his listless teaching methods and his wife Anika (Maria Bonnevie), who works nights and rarely has any time with him, is drifting away from him.

After a swig, Martin has trouble pronouncing the word industrialization, suffers a nosebleed as a result of a drunken collision with a wall and even leaves his wife thoroughly disillusioned with him, but the teacher in him springs to new life aided by vodka. "I haven't felt this good in ages," he says.

Mikkelsen's amazing ability to convey a gamut of emotions - from the broad to the nuanced - with effortless ease facilitates instant relatability with the plight of a once-talented man watching his life pass him by. Nothing has come out of the jazz ballet lessons that Martin took in his youth. He has let the prospect of a research position go a-begging. His relationship with his wife, who he still loves because "she is the mother of my children" and "she took care of my father when he died", has hit a dead-end. "You're not the same Martin I met," Anika says to her husband.

Mikkelsen's principal co-actors - Thomas Bo Larsen (sports instructor Tommy), Magnus Millang (psychology teacher Nikolaj) and Lars Ranthe (music teacher Peter) - are just as steady when they act drunk and out of control in the film's most crucial scenes. Like Martin, these characters find fresh inspiration when they are pleasantly high.

Peter exhorts his class to sing with their ears, their hearts and their souls. Tommy strikes a special rapport with his wards, especially with the meekest - a nerdy, bespectacled boy - on the football field. And Nikolaj, to give their exercise a scientific sheen, writes notes about the effects that drinking has on their social and professional performance even as his equations with his wife Amalie (Helene Reingaard Neumann) takes a nosedive.

Valuing and clinging on to dear ones is one of the underlying themes of Another Round. Vinterberg overcame the biggest tragedy of his life in order to complete the film. On the fourth day of the shoot, his 19-year-old daughter Ida (who was to make her acting debut here) died in a car accident. The film, dedicated to her, is an assertion of life. Parts of the film were shot in Ida's school with her classmates.

Kierkegaard comes in handy when life, youth and love are to be addressed. Not only does Another Round quote the Danish philosopher upfront ("What is youth? A dream. What is love? The content of the dream", reads the opening card), the film also has an exam stress-ridden student who, during his Psychology viva voce test, falls back on Kierkegaard's take on the fear of failing - and of having failed. Accept that you are fallible, he says, and you will love others and life.

The older men, too, lay down a few rules. Citing Ernest Hemingway, they tell themselves never to drink after 8 PM. One of them also alludes to the brilliant pianist Klaus Heerfordt, who could apparently play only when he was neither drunk nor sober but poised between the two states. They aspire to be all fired up and laid back at the same time: that is an expression that Tommy uses to describe Martin's dramatically improved performance as a teacher when he has achieved the BAC recommended by Skarderud.

But the line dividing moderation and bacchanalian excess is thin. Martin and his mates throw caution to the wind and seek to go beyond "the point of ignition" and attain "the ultimate catharsis". Trouble, injury and tragedy lie in wait at every turn as they push their luck. But eventually it is the hard lessons that life teaches them that show the men the way forward.

"The world is never as you expect," one of the teachers in Another Round tells his students. The film, too, is never what you anticipate it to be. Non-judgmental, hugely entertaining, profoundly moving and crammed with beautiful surprises, it goes way beyond. Another Round is heady but absolutely steady.