Anne Hathaway's Ocean's 8 Performance Will Win Over Even The 'Hathahaters'

Anne Hathaway puts her Oscar-winning acting chops to good work when Daphne wears the necklace for the first time. 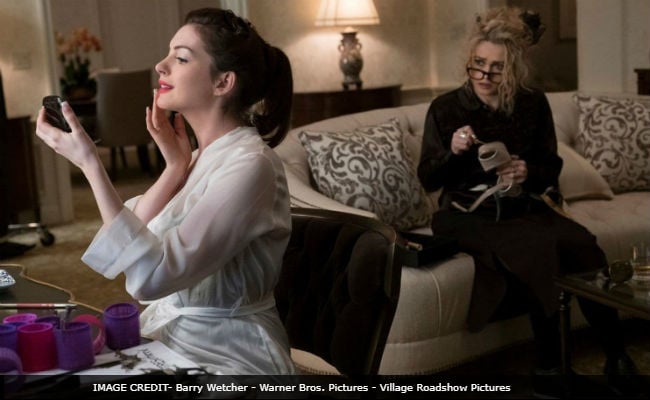 Note: This post includes some spoilers for the movie Ocean's 8.

There is a scene toward the end of The Princess Diaries in which Mia Thermopolis, the soon-to-be princess of Genovia played by Anne Hathaway, apologizes to her love interest by using M&Ms to write "sorry" on a pizza. The thought of chocolate candies on gooey cheese is enough to churn stomachs, but Mia's is a sweet gesture - and one that we probably owe to the actress herself.

Hathaway hasn't had it easy since playing Fantine in 2012's Les Misrables, a film whose media tour sparked the creation of the so-called "Hathahaters." They called out her earnest theater-kid personality, claiming the "perception of her irritating-ness is pretty widespread." She began her Oscar acceptance speech in 2013 with "It came true!" and they responded, "Why are you so annoying?" Howard Stern even vented on-air about his anti-Hathaway feelings to James Franco. (Yes, the guy whose corpse-like presence during the 2011 Oscars forced his co-host, the determined actress, to work extra hard.)

"Everyone sort of hates Anne Hathaway, and I've explained that I do, too, and I don't even know why sometimes," Stern said. "She's just so affected [and] actressy that even when she wins an award she's out of breath."

If Hathaway's greatest crime is caring too much, then she doesn't deserve any of this treatment - and that belief boosts her already delightful performance in Ocean's 8 as Daphne Kluger, a neurotic and narcissistic actress who wears the six-pound diamond necklace at the center of the movie's heist. Daphne pouts when things don't go her way, and a simple mention of her Met Gala hosting duties is enough to send her into a tizzy. The often wide-eyed character is a clever parody of Hathaway's perceived persona that doubles as a final nail in the "Hathahate" coffin.

One of the first women that Debbie Ocean (Sandra Bullock) and partner-in-crime Lou (Cate Blanchett) recruit for the job is the nearly bankrupt fashion designer Rose Weil (Helena Bonham Carter). She just has to dress Daphne for the Met Gala and persuade her to wear the $150 million necklace, they say, and all of Rose's financial woes will be resolved.

Hathaway puts her Oscar-winning acting chops to good work when Daphne wears the necklace for the first time. She sits in front of a mirror following a mid-fitting tantrum - perhaps a campy rendition of what went on before Hathaway's infamous dress swap -- and strokes her collarbone while gazing at the reflection. Rose tells Daphne she has the best neck in the business, a remarkably odd compliment that turns out to be exactly what the actress needed to hear.

Scenes like this lead viewers to doubt Daphne's intelligence, which makes the big twist - and realization of why this movie isn't called Ocean's 7 - all the more fun. She reveals to Debbie and Lou's recruits that she was in on the successful scheme, having deduced that something was up early on in the planning process. In a larger sense, Daphne's self-referential quality proves that Hathaway, too, is in on the joke - and if meme culture has taught us anything, it's that jokes die the minute their subject joins in. This time, that's a good thing.

We can all finally go back to treating Hathaway as we did in the pre-2013 era, when the term "Hathahaters" would have produced few, if any, Google search results. She was America's princess, having slipped into the role for The Princess Diaries. She was (and still is) an actress with incredible range: A charming then bitter cowgirl in Brokeback Mountain, a sardonic addict in Rachel Getting Married and finally, she was someone who didn't have to put up with strangers' irrational hatred of her, something that she told Jezebel last year she still gets asked about.

Hathaway is passionate about what she does, a perfectly acceptable trait she shares with Daphne, who responds to a character saying he loves his job with a smile and "I love mine, too!"