Aladdin trailer: Disney's remake of the 1992 animated classic has been years-in-the-making. 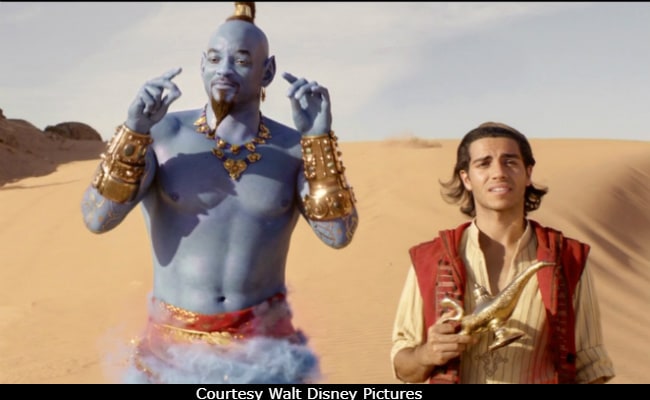 The first full trailer of Disney's live-action Aladdin dropped Tuesday, providing our most detailed look yet at the Guy Ritchie-directed remake.

The movie, which comes out May 24, had been beset by delays and some minor casting controversies. Accusations of whitewashing flew about in 2017 when English actor Tom Hardy was mentioned as a possibility to play the main villain, Jafar, in a movie set in a fictional Middle Eastern kingdom.

This new trailer opens with a scene reminiscent of the marketplace chase in the 1992 animated version. Here are nine other things we noticed.

- Will Smith is not blue the entire time.

Some fans were quite upset by the sight of Will Smith as a very blue Genie when a shorter trailer aired during the Grammys telecast last month.

This longer look at the movie reveals that Smith won't be blue the entire time. So, you know, balance.

Genie sings a snappy number, but the fan-favorite "A Whole New World" closes out the trailer and really goes heavy on the nostalgia factor.

But expect some new songs in the full movie, including a duet between Jasmine and Aladdin, as well as a Jasmine-centric song.

- Jafar is not creepy at all.

In Disney's original film from 1992, Jafar has a very sinister vibe. But when Kenzari was cast to play the Grand Vizier of Agrabah, many proclaimed that "hot Jafar" had arrived.

In these new scenes, Kenzari's Jafar definitely doesn't look evil. He kind of looks like my younger cousin (who's a good kid!). Is it weird that I'm sort of rooting for him?

Maybe a cartoon monkey will always be more delightful than any other version, but this CGI take on Aladdin's sidekick Abu has less of a sassy-and-sweet vibe, and more of a "Wizard of Oz" flying monkey vibe. What I'm saying is, I think Abu should put the trumpet down and find the rest of his monkey family.

- Everyone is very clothed.

Unlike the cartoon feature, Aladdin is wearing a shirt and DO NOT think I did not notice. Jasmine's bare midriff is covered, too.

- Aren't we missing some people?

You can't fit all of Agrabah into a few minutes, folks. Several key characters are missing from the trailer, but they seem to be in the full-length film.

Navid Negahban is expected to play Jasmine's dad, Sultan. And two new characters have been added to the remake, including Nasim Pedrad, who plays Dalia, a handmaiden to Jasmine. That addition means one more female character than the animated version had.

"She may be the handmaiden but they're best friends; they're so close because they've grown up together," Scott told the Hollywood Reporter. "So we wanted people to watch the movie and see Jasmine's relationship with another woman, and be like, 'Ah, that's what I'm like with my girlfriend,' or 'We would so do that if I was in that position.' That's something that's missing from the animation."

Billy Magnussen (whose casting received some backlash and questions about whitewashing as well) reportedly plays Prince Anders, a suitor of Princess Jasmine.

You know Iago, the wisecracking, parrot sidekick of Jafar. Some will tell you he's a Top 5 character. But here we see no CGI parrot. Gilbert Gottfried, who voiced Iago in the 1992 feature film and subsequent Aladdin"-related animated projects, apparently did not participate in the remake.

- Aladdin has excellent eyebrows, and I'd like to know who threads these for him.

There are many very good eyebrows on display in this trailer, but those on Massoud's face rank as the best. (It's from threading, trust me.)