Ranveer Singh and Ajay Devgn have cameos in Sooryavanshi 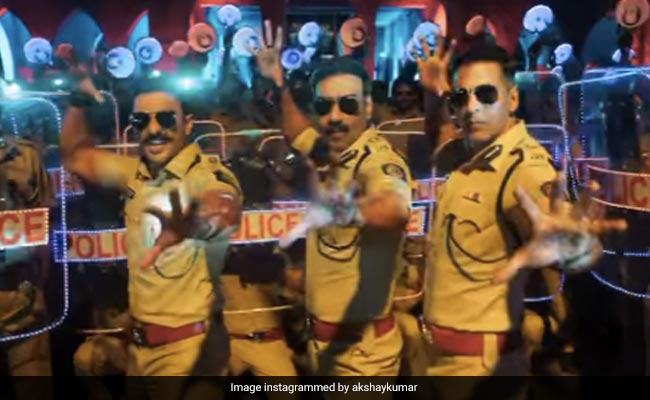 A still from the teaser. (courtesy akshaykumar)

The makers of Sooryavanshidecided to tease the audiences with the teaser of the song Aila Re Aillaa, which is slated to release on Thursday. The song features the film's lead actor Akshay Kumar along with Ajay Devgn aka Singham and Ranveer Singh aka Simmba. All the three actors happen to be characters from Rohit Shetty's cop universe. While the teaser looks interesting, we can't wait for the real deal. Sharing the teaser, Akshay wrote: "This Diwali come back to cinemas with Sooryavanshi releasing on 5th November. Here's a teaser of the celebration in store. Aila Re Aillaa, song out tomorrow." Ranveer Singh referred to the song as a "celebration when Singham, Simmba and Sooryavanshi come together."

See the teaser of the song here:

Sooryavanshi has many changes in terms of its release dates. It has been rescheduled several times owing to the pandemic situation. In 2020, shoots and productions were halted in mid-March due to the first wave of the COVID-19 pandemic. However, in the months of October and November, shooting schedules were allowed to resume. As the second wave of the pandemic hit the country in April, a lockdown was imposed yet again, leaving distributors and cinemas affected. The film is finally set for a Diwali release.