After Rampage And Jumanji, Dwayne 'The Rock' Johnson Has A New Fan - Amazon's Jeff Bezos 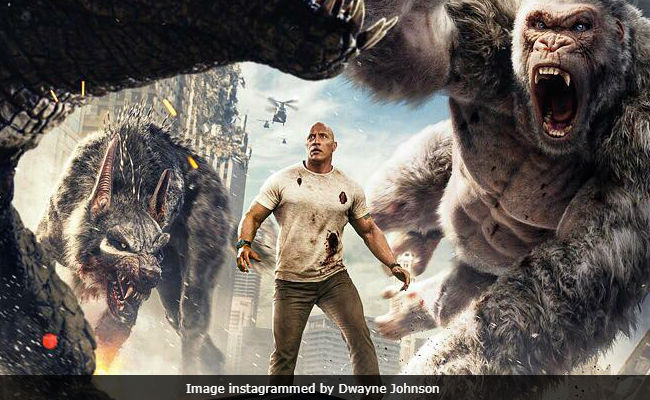 New Delhi: Dwayne 'The Rock' Johnson has a new fan and that's Amazon CEO Jeff Bezos. The entrepreneur watched The Rock's latest film Rampage and he was evidently bowled over. After watching the film, Jeff Bezos tweeted: "I love Dwayne Johnson. Still working on my smolder (a reference to Dwayne Johnson's previous film Jumanji: Welcome To The Jungle)." The Rock replied, "The love and admiration is mutual." On Instagram, the 45-year-old actor also shared a screenshot of Jeff Bezos' tweet and added: "Keep inspiring the world - myself included. Look forward to working with you down the road... until then we'll continue to be the trail blazing Smolder Bros who make being bald look bad ass and sexy on every day that ends with Y."

Jeff Bezos + RAMPAGE = The love and respect is mutual brother. Keep inspiring the world - myself included. Look forward to working with you down the road... until then we'll continue to be the trail blazing Smolder Bros who make being bald look bad ass and sexy on every day that ends with Y. #BezosRock #TheSmolderBros

For thise who want to know what 'smolder' means - here's an explanation by The Rock (and no, it's not just about his character's name being Dr Smolder Bravestone):

Started working on your smolder already?

Rampage released in USA, UK and in parts of Europe last week while it will open across Indian screens on April 20. The sci-fi film has been directed by Brad Peyton, with whom Dwayne Johnson collaborated on San Andreas (released in 2015). Rampage has fared well at the box office.

Apart from films, Dwayne Johnson recently featured in headlines when he opened up about his secret battle with depression. He told The Express: "I reached a point where I didn't want to do a thing or go anywhere. I was crying constantly." Before talking about depression, on Instagram the actor recalled how he saved his mother from a suicide attempt.

Not your typical scene on our comedy #ballers, as I cracked a beer open toasting my character's brother, William who committed suicide. Got me thinkin' though bout how many of us have been affected by suicide of our friends, family. Struggle and pain is real. We've all been there on some level or another. My mom tried to check out when I was 15. She got outta the car on Interstate 65 in Nashville and walked into oncoming traffic. Big rigs and cars swerving outta the way not to hit her. I grabbed her and pulled her back on the gravel shoulder of the road. What's crazy about that suicide attempt is to this day, she has no recollection of it whatsoever. Probably best she doesn't. Shits of a scene to shoot - didn't like it - but it did reminder that we always gotta do our best to really pay attention when people are in pain. Help 'em thru it, get 'em talkin' about the struggle and remind 'em that they're not alone. We got lucky that day when I was 15 and that ain't always the case.