On Twitter, Vijaya Nirmala is being remembered with respect by Jr NTR, Sudheer Babu and others from the South film fraternity 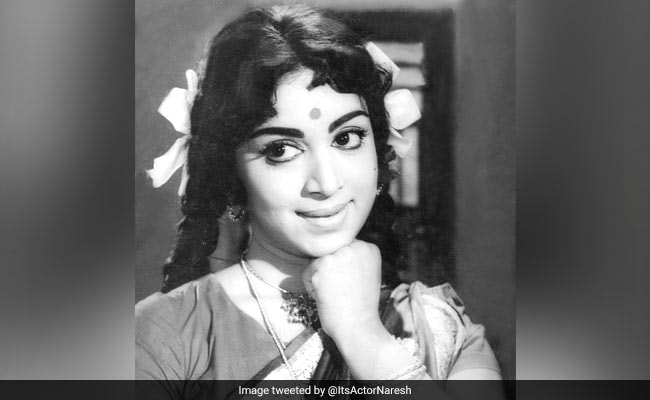 Veteran actress and director Vijaya Nirmala died in a Hyderabad hospital early this morning. She was 75. Her son, actor Naresh, announced her death on Twitter and revealed that the last rites will be held tomorrow. Those wanting to pay Vijaya Nirmala their last respects can do so at the family residence in Hyderabad. No cause of death was given; Naresh wrote simply that Vijaya Nirmala died of 'sickness.'

I regret to inform you that my Mother senior Artiste, prominent Producer & Director, Dr. G Vijayanirmala Garu passed away during early hours today, that is, 27.6.2019, at Continental Hospitals, Hyderabad, due to sickness. She was 75. pic.twitter.com/7D5b5VOXmH

Her body will be kept at our residence ( Nanakramguda) today from 11am Her final rites will be held tomorrow, that is, 28.6.2019.
Further information will be updated .
pic.twitter.com/MorRuNOXCM

Vijaya Nirmala appeared in over 200 films in Telugu, Tamil and Malayalam, and directed 44 Telugu films. Vijaya Nirmala is survived by her husband Krishna, son Naresh and step-children, one of whom is actor Mahesh Babu. On Twitter, actor Sudheer Babu, who is married to Vijaya Nirmala's step-daughter Priyadarshini, wrote: "A terrible day for my family. A pioneer, a legend and most importantly my mother-like personality Vijaya Nirmala garu made her way to God."

A terrible day for my family. A pioneer, a legend and most importantly my mother like personality, #VijayaNirmala Garu made her way to the God. May her soul rest in peace. #Ripvijayanirmalagaru

Sudheer Babu also tweeted: "In a typical largely male occupied movie world, she paved a way for women. She will remain an inspiration and a symbol of women's empowerment."

In a typical largely male occupied movie world, she paved a way for women. She will remain an inspiration and a symbol of women empowerment. If a Guinness record could only explain the beacon she is for women in TFI. #RIPVijayaNirmalaGaru

On Twitter, Vijaya Nirmala is being remembered with respect by actor Jr NTR, politician Jay Galla, writer BVS Ravi and others from the South film fraternity.

Vijaya Nirmala Garu was a pioneering filmmaker whose life is an inspiration for many. Extremely saddened to hear the news. Extending my deepest condolences to her family. #RIPVijayaNirmalaGaru

Saddened that Smt Vijaya Nirmala garu is no more. As an actor and a Director, her contribution to the Entertainment industry has been enormous. Her support and guidance to the family, friends and industry will be missed. May her soul rest in peace. #RIPVijayaNirmalaGarupic.twitter.com/IhTZFDGiuH

Painful to know that Smt. VijayanirmalaGaru has passed away. As an impactful filmmaker, she's been an influencer for many women to take big strides into film industry as filmmakers!Her works like Meena will b everlasting. condolences to KrishnaGari Family. #RIPVijayaNirmalaGaru

Vijaya Nirmala began as a child artiste in Telugu movies and later made films in Tamil and Malayalam as well. Her credits as an actress include Rangula Ratnam, Bhargavi Nilayam and Saakshi.

Vijaya Nirmala later moved to directing and holds a Guinness World Record as the most prolific female director; she was believed to have been one of only two female filmmakers to have directed Sivaji Ganesan, the other being actress-filmmaker Savitri. Vijaya Nirmala also produced films under her own banner and managed the family-owned Padmalaya Studios in Hyderabad.

Vijaya Nirmala was married twice, first to Krishna Murthy and then actor Krishna.