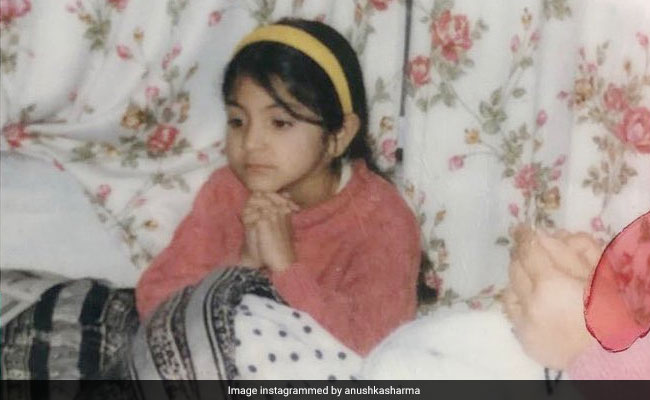 Anushka Sharma is in the throwback kinda mood this Friday. The 31-year-old actress made the best use of Flashback Friday as she flipped through the pages of her childhood album and dug out three priceless photos of herself. "Little" Anushka Sharma sets the throwback mood just right as she features in three different moods in three throwback photos on her timeline, all of which come with the same caption written in Hindi: "Little me." In the first one posted, a much younger version of Anushka sports a mischievous expression as she enjoys some ice cream. Anushka's photo with braided hair garnered over 2 lakh likes in less than an hour. What can we say, that's how adorable it is.

Meanwhile, Virat Kohli picked a favourite from Anushka Sharma's Flashback Friday extravaganza. He emptied his stash of the heart emojis on the second post, in which a baby version of Anushka Sharma adorably smiles at the camera. This one garnered over 3.6 lakh likes in an hour.

In the third throwback post, "little" Anushka Sharma is too cute to handle as she appears to be in a contemplative mood or praying while comfortably tucked under a blanket. Young Anushka 3.0 recorded the highest number of likes amongst the three with over 6 lakh likes in an hour.

Anushka Sharma is amongst the most followed Bollywood actresses on Instagram and needless to say that her posts are almost always viral. She also often features in loved-up posts on Virat Kohli's Instagram. Anushka and Virat had a destination wedding in Italy's Tuscany in 2017 after dating for several years. On the work front, Anushka Sharma will be producing Netflix original Mai next. She was last seen in Zero and is currently on a break from acting.