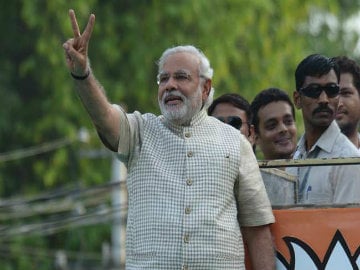 File Photo: Narendra Modi greets supporters after his landslide victory in Vadodara on May 16

Washington: India's Prime Minister-designate Narendra Modi has the fastest growing Facebook page for any elected official in the world and is only second after US President Barack Obama in terms of fan following of politicians, an official of the social networking website said on Tuesday.

"Mr Modi continues to have the fastest growing page (for the last day, week and month) of any politician or elected official worldwide," Andy Stone from Facebook policy communications told PTI.

On April 7, the first phase of the Indian general elections, Mr Modi had 12.46 million fans on the Facebook. On Tuesday, when he was appointed by President Pranab Mukherjee as the next Prime Minister of the country, it had jumped to 15.245 million fans.

After US President Barack Obama, who has over 40 million fans on Facebook, Narendra Modi is the second most popular politician in the world.

It is only during this election cycle, that he crossed Mitt Romney, the former Republican presidential candidate, who now has 11.345 million fans on Facebook.

On the day of counting, mentions of Mr Modi saw an increase of more than seven times.

The historic general election which concluded with the BJP getting a majority in Parliament has seen a record growth in Facebook pages in India, Stone said.

"Since the elections were called on March 5, Facebook users in India have been engaging with their friends, the candidates and political parties to discuss the 2014 Lok Sabha elections," Stone said.

From the day elections were announced to the day polling ended, 29 million people in India made 227 million interactions (posts, comments, shares, and likes) regarding the Indian Elections on Facebook.

That is two-thirds of all daily active Facebook users in India and an average of 10 interactions per person. In addition, 13 million people made 75 million interactions regarding Narendra Modi, Stone said.

On each day of polling, Facebook ran a megaphone to people in India letting them know it was Election Day and encouraging them to share that they voted. This megaphone was seen by over 31 million people, Stone said.

Moreover, the candidates and political parties saw a large amount of interactions on their Facebook pages.

"During the election, Mr Modi became the second most-liked politician on Facebook behind only Mr Obama" the Facebook official said.

In addition to Mr Modi, who is ranked the top among popular politicians in India, Arvind Kejriwal of the Aam Aadmi Party (AAP) is ranked a distant second with 5.434 million fans.

Enriched by its experience in India's general elections, the Facebook now plans to roll out the "I'm a Voter" megaphone this year.

Promoted
Listen to the latest songs, only on JioSaavn.com
"We estimate conservatively that nearly 400 million people around the world will see the megaphone this year. This includes India, where over 31 million people saw the megaphone during the Lok Sabha elections," Stone said.