Crony capitalism an election issue in BJP vs Congress 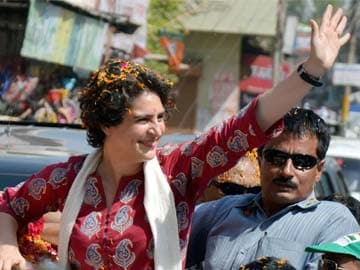 Priyanka Vadra during an election campaign for her mother and Congress President Sonia Gandhi in Raebareli on Monday.

New Delhi: The Bharatiya Janata Party (BJP) has used the emergence of Priyanka Gandhi as a star election campaigner for the troubled Congress to criticise the wealth amassed by her businessman husband and score points in a wrangle over crony capitalism.

Cozy ties between business and politics are a big issue in the elections after a run of scandals weakened the Congress-led government, paralysed decision-making and stifled investment. (Full Coverage: India Votes 2014)

Halfway through the five-week election, Priyanka went on the offensive Narendra Modi, the BJP's prime ministerial candidate, and accused his party of "insulting" her husband by questioning whether her powerful family had facilitated sweetheart land deals for him in states like Haryana, where the Congress is in power. (Robert Vadra video an act of desperation by BJP: Congress)

The Congress is headed by Priyanka's mother, Sonia; her older brother, Rahul, is the party's No 2.

Yesterday, the BJP stepped up its offensive on her husband, Robert Vadra, with a mocking video.  "Farmers cannot clear their debt all their lives, but the son-in-law became a billionaire overnight. We want to know what is the Robert Vadra model of business," BJP spokesman Ravi Shankar Prasad said. (BJP's sharpest attack ever on Robert Vadra)

It demanded an explanation for how Mr Vadra had built up a real estate portfolio  over the past five years. The video showed a well-dressed Mr Vadra working out, contrasting it with poor farmers whose land he bought.

Promoted
Listen to the latest songs, only on JioSaavn.com
The Congress has in turn suggested infrastructure billionaire Gautam Adani was granted favours in Gujarat, where Mr Modi has been chief minister since 2001.

Mr Adani has said in an interview to NDTV today that the Gujarat government has shown his company "no special favours" though the billionaire endorsed Mr Modi for Prime Minister. "Modi has provided leadership in Gujarat, he can provide it at India level as well," he said to NDTV.