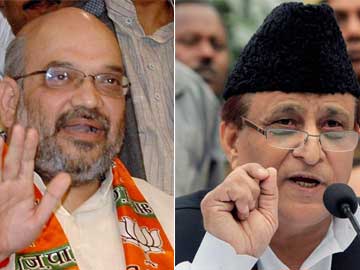 Lucknow: Azam Khan, a senior minister in Uttar Pradesh, today said he will not apologise for an alleged hate speech that led to him being banned from campaigning by the Election Commission. (Full Coverage: Elections)

"I have not committed a crime," Mr Khan told reporters today.  The 55-year-old is a prominent Muslim face of the state's ruling Samajwadi Party.

The ban on Mr Shah was lifted last evening after the Election Commission said the BJP leader had conceded his fault and in writing vowed not to use "abusive or derogatory language." (Election Commission allows Amit Shah to campaign in UP)

The Samajwadi Party suggested that the commission had not treated Mr Shah and Mr Khan equally. "When Azam Khan defends his action, how can the ban on his campaign be lifted?" asked an Election Commission source. "We can examine that once he accepts our authority and orders," said the source to NDTV.

Promoted
Listen to the latest songs, only on JioSaavn.com
Muslims account for nearly 20 percent of the population of UP.  In September last year, Hindu-Muslim riots, allegedly fuelled by inflammatory speeches by leaders from a cross-section of parties, left nearly 60 people dead in Muzaffarnagar in the western part of the state.  Nearly 60,000 people were displaced.

The BJP, under prime ministerial candidate Narendra Modi, is expected to win the maximum seats in the national election -voting, spread across nine phases, ends on May 12; results will be declared on May 16.