On Wednesday, several media reports claimed that IIT-Madras Chairman had written a letter to the MHRD expressing his displeasure over the institute not being given the IoE status. 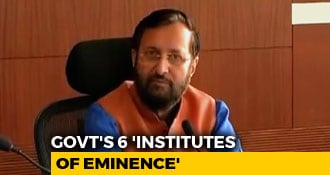 No Letter From IIT Madras Over IoE: Prakash Javadekar

"There's no letter. I don't know where this came from. And they (IIT-Madras) have already clarified that they have issued no letter," said Union Human Resource Development Minister Prakash Javadekar on Thursday in response to the reports on IIT Madras' letter regarding Institute of Eminence (IoE) status. On Wednesday, several media reports claimed that IIT-Madras Chairman Pawan Goenka had written a letter to the MHRD expressing his displeasure over the institute not being given the IoE status despite having matching credentials in comparison with those who got it.

On July 9, this year, the Ministry granted IoE status to IIT-Delhi, IIT-Bombay and Bengaluru-based Indian Institute of Science (IISc) in the public sector; and Manipal Academy of Higher Education, BITS Pilani and Jio Institute by Reliance Foundation in the private sector.

However, it drew flaks over the grant of IoE status to the yet-to-be established Jio Institute. On July 26, during the question hour in the Rajya Sabha, HRD Minister clarified on the IoE status of Jio Institute and said that the 'Institution of Eminence' tag has not been bestowed on the Jio Institute, but only a letter of intent has been given subject to conditions.

The three IoEs from public sector will get Rs 1,000 crore from the government in the next five years. The tag gives greater autonomy to the institutes in terms of recruiting foreign faculty and admitting foreign students.