Our Alliance In JNUSU Polls Is 'Conscious Unity Of The Oppressed': BAPSA-Fraternity 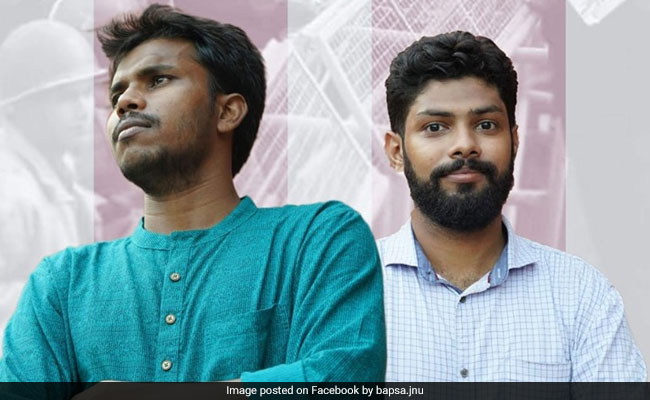 Jitendra Suna and Waseem RS are President and General Secretary candidates of the alliance.

BAPSA-Fraternity alliance in this year's JNUSU elections is 'politically conscious unity of the oppressed in India', says activists affiliated with the student bodies. The activists also called the coming together as 'an alliance inspired by the historical solidarity between different marginalized groups'. In the upcoming Jawaharlal Nehru University Student Union (JNUSU) elections, the alliance of Birsa Ambedkar Phule Students' Association (BAPSA) and Fraternity Movement have fielded two central panel candidates for the posts of President (Jitendra Suna) and General Secretary (Waseem RS).

Apart from BAPSA- Fraternity alliance, Left Unity (SFI, DSF, AISA and AISF), NSUI-MSF, CRJD and ABVP are contesting for this much-followed student body elections in the country. The polling will be held on September 6 and the countil will start on the same day.

"This is an alliance inspired by the historical solidarity between different marginalized groups such as the mutual support given by Savitri Bhai Phoole and Fatima Sheikh as well as more recently between Asaduddin Owaisi and Prakash Ambedkar and many more examples," said an activist who is part of BAPSA-Fraternity alliance.

"This post-mandal phenomenon of identity assertion in academic campuses will make larger shifts in the contemporary political formulations across India," he added.

BAPSA, which emerged as a student organization in 2015, began with a commitment towards creating an autonomous space for all marginalized communities.

"Rejecting the right wing politics of ABVP as well as the sheer arrogance of the leftist political hegemony and politics of patronisation and appropriation which denounced the existence of social and political pluralities on the campus, BAPSA's aim is to unite all oppressed on a common platform," said a student activist.

Within the span of two and a half years of activism, Fraternity Movement has been involved in the fields of inclusive education, campus democracy, reservation, islamophobia, land reforms, higher educational issues and rehabilitation.

Jitendra Suna (29) is a research scholar at Centre for the Study of Discrimination and Exclusion (CSDE) and belongs to Pourkela village in the backward Kalahandi district of Odisha.

Waseem RS, a first generation researcher from his community, is a PhD research fellow at the Centre for the Study of Law and Governance and belongs to Kozhikode, Northern Kerala.

The RSS-affiliated Akhil Bharatiya Vidyarthi Parishad (ABVP) and the Left Unity have fielded candidates for all the posts.